I finally backed something on Kickstarter.  It often seems like an appealing thing to do, and it is risk free, but somehow I just didn’t go for it.  Here is a successor to Planescape: Torment, written and produced by “old school guys” (see the video by following the link above, I could not get it to show here for anything).

I like what they say about their thoughts on putting together a game where everything is right and everything matters and there are real moral choices to be made.  These are the kind of games I started out with and I’d love to step into another such game world. 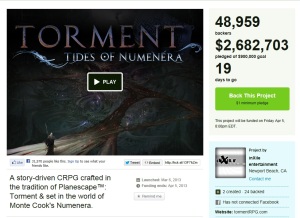 After more digging than should have been necessary, I found that Tomb Raider is not available for PC in North America except as a digital download.    Here is the shuffle off to Buffalo explanation from the Eidos forums:  http://forums.eidosgames.com/showthread.php?t=128060

What did Han Solo say?  Laugh it up Fuzzball?   Oh well.  I got it today and have a couple of paper printouts instead of an appealing game box and it cost me just the same as it would of for a boxed item.  Saved them some money, though, so go team go.

The intro was shorter than I thought it might be, I’ve seen the clip before where the ship Lara is traveling on runs afoul of something that cracks it in half.  She misses a jump the real Lara could make in her sleep and ends up in the water and on the beach.  For some reason I love a game that makes me jump because something jumps out at me, and Tomb Raider delivers on that right off.  I honestly had forgotten how much time I’ve spent playing video games and screaming when the unexpected happens.

Once the unexpected happens you’re in a creepy cave, learning how to swing like a monkey upside down (is that a boa constrictor skin wrapped around Lara?) and you light a torch and get to be a firebug.  I was doing fine I thought, when some guy grabbed me by the ankles and I was supposed to THRASH to get him to let go.  I panicked and couldn’t think if those onscreen symbols were the arrow keys or the left and right mouse buttons or WHAT.  Then the really icky gruesome bad guy slooowly planted a sharp hatchet in my chest and it was over for the initial session.

When Lara is running and jumping, it is Lara, when baddies attack I take it personally and it is me.  My son and husband never have taken it all so personally, they just control the character, and they never ever scream. 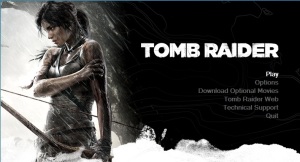 I spent a little more time last night trying out Guild Wars 2.  You will be pleased to know my character was given the foofy multi-colored dress of her dreams by a nearby npc.  No more embarrassing leaf cover.  Note also I have a flame coming out of a spot in my forehead.  How handy is that? 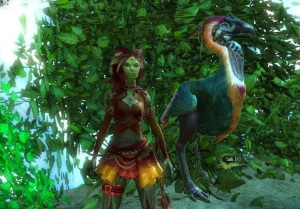 I explored the area a bit and came across an npc who helpfully brought up a map of the area which showed in a small video clip that let me know how to find other npcs with tasks for me.  Too funny I passed that npc a bit later and some other guy was clearly watching the little clip because right by the guys head was a little icon of a film reel.  Don’t disturb! 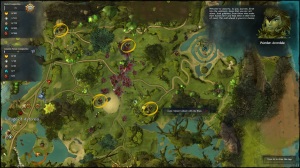 While I was meandering up popped a notice of a NEW EVENT NEARBY!  These appear to be like the public quests in Warhammer Online.  The first event I tried out was one where you killed monstrous fireflies and brought their essence over to an npc.  As you gave them to her, you could see a progress bar for the event and also see how much you had contributed to the event.  Well, sometimes competitive doggie that I am,  I ran and killed the fireflies as quickly as I could and trotted right back over to the npc with them, thus raising my contributions to the event and earning a GOLD Contributor status for the event.  Pity the poor fools who were saving up their essences to turn in all at once.  I bet they either got shut out or were PUNY contributors!  Hehe.

I like these public quest events.  It is nice to work somewhat cooperatively (but not as cooperatively as in a dungeon setting) with other people.  You get help, a little competition, and you can all hit on the same mob and everyone gets credit.  It makes the world a little more lively.

I also got a message that I had an Achievement.  Open your Hero Panel!  I like that name better than character sheet.  Makes me poof out my character chest a bit.   Thanks to World of Warcraft I have become something of an achievements fiend.  The rewards for getting the achievement will have to be worthwhile to me.  I want either some cool title or a pet, a mount, something!  We shall see.  I need to look more closely at this panel but I like that it is there.  One thing these achievement sets can do for you is help you make sure you have explored, quested, and done everything you can do in an area before moving on. 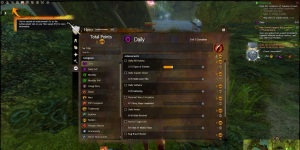 Long download to get the game up and running.  Tons of options in character creation.  I chose an Elementalist with Fire as my specialty. 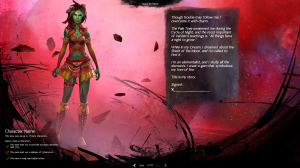 I may not have made the best selections in my character traits, but I just wanted to try it out and chose what I liked.

The intro is in a very interesting art style, like Japanese cut paper.  You’re in a dream sequence with lots of helpful tooltips to help you move along.  As you move out of the dream sequence things are still in a watercolor wash.  Perhaps other starting areas are sharper.

That’s my girl on the left.  Rather tree-like and ropy with not the best wardrobe.  Note at character creation she is wearing a foofy colorful dress.  I guess she has to grow into something more charming.  Hair turned out odd.  May have to stick a helmet on her at the first opportunity.

Today’s log in to World of Warcraft brought these revelations:

You can only do the craft quests in Darkmoon Faire once per month. Boo hiss. Once per day would have scooted me along nicely in crafts such as leatherworking and enchanting I struggle with.

I can’t figure out how to send mail to all my guildies.  Should be simple, maybe it is but no.

After a long patch day wherein they had servers down for much longer than stated they came up and I was working so quien sabe?  This morning though they are doing rolling restarts of all realms.  Tsk.  Try to get it right beaners.

My level 90 character got a quest pop up to see about the Thunder King!  Whoooo hooo!  Back to Pandaria she goes. 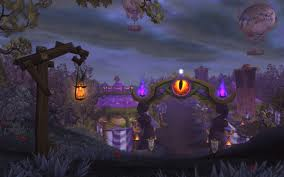 Guild Wars 2    After dicing about this one I slunk out and grabbed a copy off the local store shelf.  I guess thinking about having it made me uberously desire to have it.  Report some time this week on wut I think. 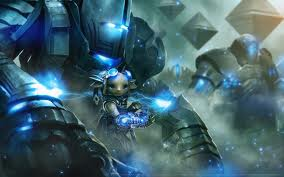 Tomb Raider   I regret to say I am a low fish and would have this too except the spot for the PC version was empty.  Don’t tell my husband. 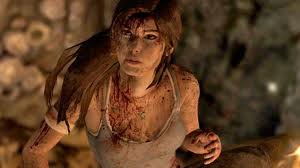 Lord of the Rings Online is downloaded and installed after several hours.  At least no monies were exchanged in its acquisition (though I bought three copies when it was initially released so I’m golden there). 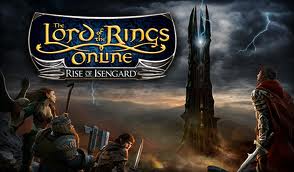 Comments:    I certainly welcome comments but don’t get many.  Too much to ponder in my writing, no doubt.  However, just mentioning SWTOR yesterday brought me SPAM targeted at SWTOR-ites.  Moving on up…

I like to play World of Warcraft as I drink my morning coffee.  Accomplishing mini-goals helps me wake up and puts my mind in a nicely organized place.    Today the beaners took the servers down for Patch 5.2 even though they’ve been downloading patch content in the “background” for a month.  What to do to wake up?

I could play Oblivion or Morrowind.  Both good choices.  I haven’t played either for awhile so I would need extra brain power to remember where I was and how to work the controls etc.  Zzzzzz.

The new Tomb Raider game is out today.  I could download digitally and voila join the new Lara Croft in her adventures.  Two things stop me.  I’m feeling cheap this morning and don’t want to pay $60.00.  Since I first saw the new Lara, all beaten and scratched and seeming very much the victim, I have been of two minds about having this one.  It is getting good reviews from the people who like Drake’s Uncharted.  This is a Playstation only game which has taken over the adventurers mantle from Lara who should be more like Nathan Drake.  Well no.  She should be Lara Croft.  I have been a huge fan of Lara in all her incarnations.  How can I abandon her now? 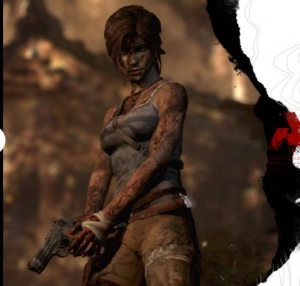 So then I thought how about Guild Wars 2.  More good reviews.  The original was intriguing.  Another 60 bucks though…nah.   I have the original Guild Wars, maybe instead of digging for my box I could just download from the web.  Not seeing it on their site.  On the plus side, I’m into my second cup of coffee and am starting to wake up. 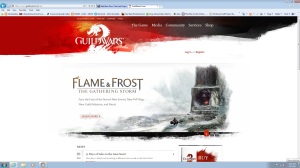 How about Lord of the Rings Online?  I played for several years and enjoyed it but abandoned at the free to play stage.  It kindly let me download from the site, but the time involved is 5 hours of download.  Zzzzz.  Hobbiton takes shape as we speak. 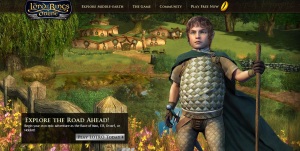 I rejected Star Wars the Old Republic because I disliked the game at launch and have all those old resentments about their taking out Galaxies to make room for this sterile mess.

I’m awake and I can do other things while LOTRO slowly downloads…Happy Patch Day! 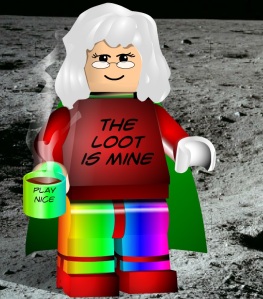 Since I rarely write here and my guildies don’t read it even if I do, I thought I’d branch out and make it a more general game blog.  I can write about World of Warcraft since I play it most but there are some upcoming games such as the Tomb Raider reboot and Bioshock Infinite that I’m going to want to play.

Also upcoming is Neverwinter Nights which I’m not so sure about but since it is free to play there is no investment except for time and curiosity.

I tried to change the blog name and it may not have taken quite yet, but I will persevere.