I never got a real chance to play Wildstar at release, and I’m pretty happy to be able to start again and give the game a proper play through.   For a variety of reasons I couldn’t play during opening week.  Even getting in this week, the place is crowded and it’s a battle to interact with npcs and kill mobs without one or more people bouncing in from out of nowhere to get it before you do.

I’ve made one of each character class and am actually excited to play the Rogue-like Stalker.  Since my level 95 Wow Rogue is my favorite character in that game these days, I’m willing to give stealth classes a chance.

When you enter stealth she pulls out incredibly long Wolverine like claws and away you go.  I’m pleased to see her stealth isn’t easily broken, so she can move ghost-like through the world.  While I’d like to rotate between all of my characters, she is a favorite and will probably get the most play time for a bit.

The music is so vigorous and uplifting. Energizing!

The Announcer with his “Double Kill!” makes you feel like you’ve scored big.

Lots of achievements, including lore bits to find and exploration of the map.

Paths…I took explorer with an earlier character and really liked it, took Settler with Stalker and am not so enchanted with it so far.

I love that you get so many opportunities to jump and double jump and practically fly in so many places.  It is a joyous thing.

They made me rename my characters who had previously existed, but luckily they were only asking me to add a last name, not change my name altogether.  I wish Turbine had thought of something like this to differentiate characters.

Brothers: A Tale of Two Sons begins with a storm at sea and a boy in a small boat losing his mother to the waters.

The unlucky boy, recalling this, is hailed by his brother in the present.  Dear old dad is coughing and hacking as if he’s about to breathe his last.  The boys must load him onto a crude wooden cart and make their way down the hill and over a multi-level wooden bridge with levers and cranks.
Easy, right?  The boys have to work in tandem using only your thumbs to maneuver them to grab the cart, give a boost up to another level, and coordinate all.
I like the puzzles, and managed to get them to the bottom of the hill ever soooooo slowly.  Pulled the lever to move a section of bridge.  Climbed a rope and turned the crank…doh should have positioned dad and his cart on the lift first.  Now having trouble getting both boys back over to grab and move the cart.  A little frustrating but doable.  I’ll just need to do it in small increments so as to not go buggy from the controls.
The game uses the Unreal Engine so all of the landscape is beautiful and sharp.  The characters themselves are rather cartoony.

I’ve been doing some dreaded repetitive things in games lately, so I’ve been looking to see if I like listening to Podcasts.

Hoping for some game casts, and some science fiction podcasts, maybe a few mystery themed ones, I have found many more than I would have guessed existed.

It surprises me to find that I am not enjoying podcasts which feature a single game or theme so much.  I’m not sure what it is, but they seem to be fixed on minutiae of lore, or in the case of one, they spent a segment talking about the current deals in the in-game store.   Since I never look at any in-game store, I have zero interest in hearing the contents of the store read out.

Not to be cranky, but in many cases the opening music played before the show begins is jarring and annoying.  When this is followed by several minutes of the cast yucking it up rather than talking about any topic at all, agh.  Next!

Here is an entertaining starter list.  I’ve subscribed to a large number of podcasts via iTunes,  and only briefly went through the list, and am still looking for more.  Enjoy!

Jon Shute and Tim talk about a wide variety of games.  Very entertaining.  I thought Jon was really humorous.  The episode I listened to talked about tanking a heroic dungeon in Rift, having never been in that dungeon at all. Things went awry.

Full of what?  A Podcast about all things Star Wars.   They talked about the exciting new trailer.

Talking about speculative fiction.  The episode I listened to featured the amazing Ellen Datlow.

I’m a huge fan of Chris Hardwick on The Talking Dead.  He’s such a huge fan himself,  and he sees the same things the personage on the street sees.  He gets to talk to producers and cast!

The Nerdist Podcast covers movies, tv and all things nerdy.   I chose the podcast with Jack Black, who I’d like to see more of in films.  Funny funny guy who does adventure well.

Not a podcast, but a motherlode of old science fiction, mystery and horror radio shows.  I listened to an adaptation of Ray Bradbury’s “And the moon be still as bright”  from a show called Dimension X.

Wired Magazine’s podcast on a wide variety of topics.  I loved the book The Martian by Andy Weir when it came out.  Fuzzy as I am in math and science, “hard science fiction” has always been my favorite sub genre.   This week I saw the film version of The Martian, just spectacular and moving.  I listened to the interview with Andy Weir on the podcast.

Justin Olivetti and Bree Royce talk about a variety of MMO games and news bits.  They are the first podcast I listened to, and made me want to find more.  It helps that I love the columns they write, but they have a fine repartee.  They give their own opinions of games they love and hate.  Bree is my heroine for managing to mention Star Wars Galaxies in each podcast.   I’m listening to each new episode as it comes out.

I’ve been reading Wow Insider for ever, and now that they’re Blizzard Watch, they’ve been just great and have restored many features.  It is fun to hear their regular columnists talk about World of Warcraft, and they seem to know every inch of the world and it’s lore.  Not a fan of the other Blizzard games, just give me my Wow.

From Healing the Masses and ME VS Myself and I,  they talk about various MMOs.  Both writers like to theorize a bit, so it’s fun to hear what they have to say.

I did just one set of the garrison Dailies to get decorations for my garrison.  There actually isn’t anything else for this holiday on the Events vendor that I’m interested in so I’ll let a lower level character work on the regular holiday activities.

I like the decorations that I have, it isn’t quite like having the ability to customize my garrison, but it does add something.  It looks like I could leave my Halloween decorations up all year if I want to.  Hmmm.

I’m not a fan of the bird Pepe, who was hanging out in the garrison graveyard, even though he comes with costume changes.  I hate having anything on my head, and a bird perched there is really obnoxious.  Why doesn’t he perch on my shoulder like a proper bird?

I like that these holiday decorations have been added.  There isn’t any reason why more features and customizations can’t be added to the garrison over time.  If there won’t be another building/area like this going forward, tweak it, add to it.  Make it home.

At some point they just need to allow you to make it public, or set a permissions list of people/your alts/whatever who can enter your garrison when you’re not around.

Well, I dreamed I was fighting a bunch of vampires.  I had no weapons of any kind, to my horror.  So like a heroine in a video game I took them out with my bare fists.  They cracked open and poured copious amounts of dark red blood from their vampiry shells as I took them out like mad.
Ya ya, what a crazy person, you say.
I know exactly the source of this dream.  I was lured to start a new Fallout Shelter vault on my phone by the promise of five free lunch boxes and a new character from Fallout 4 named Piper.
My original vault runs like a dream, so perfect.  In the new vault, I’m running low on resources constantly.
Here’s the nightmare: nobody has a weapon and they’re all fighting any Raiders and Radroaches with just their fists.  Horrible to watch them flail helplessly.
Every time I check in I fear to see all the dwellers dead, and I have no caps to bring them back.  (Sob, sniff) 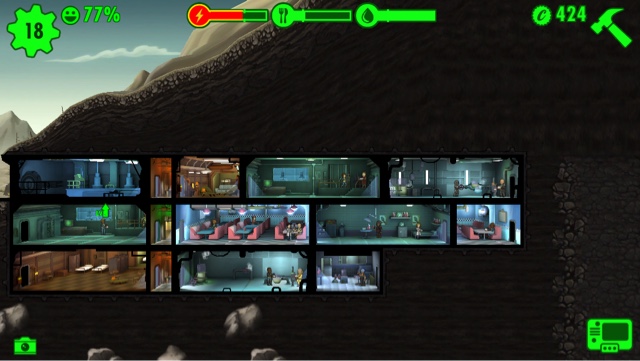 I finally did one of the Tanaan Quests: The Ruins of Kra’nak tonight.  I’m rolling in oil, rolling, I say.

The first part of this experience was a quest to help Scrollkeeper Reshad find clues at the Ruins.  He was so awful.  Standing on top of me, standing on the mobs I was fighting so his dialogue box kept coming up, standing on corpses making them difficult to loot.  He couldn’t hear me but I said many bad things to him.

It culminated with one of those dread “Defend Reshad” sequences.  I can fight two, three of these mobs tops, more than that and I’m dead.  I died way more than normal tonight.  This sequence was the only one where I wished I had a group, because no way could I prevail.

I couldn’t believe it when I got back to my body and the fight was over, and Reshad completed my quest there.  Luckily the Stinker From Mars ran off and I could work on the rest of the objective for the oil alone, stealthed, without him being underfoot.  Whap, whap.

I found so many treasures in the place, my item level shot up to a respectable number, finally.  Too good.

My Combat Rogue made level 90 this week.  I  never thought I’d be able to get a Rogue leveled to 90+ without a boost because, she has always seemed so hard to play.

Not anymore.  She’s working for the Klaxxi and seems almost untouchable.  Unreal. (Sniff) I’m so proud of her.

I’ve been trying to get her to Draenor because I can really use her leatherworking skills.  But, no way I’m sending her till she’s as close to 500 Ilvl as I can get her.

I also haven’t taken time to get the scorpion mount from the Klaxxi with past characters, and I really really want it.  My underdog Rogue is going to be my Heroine Rogue after all. Who would ever guess!

Perhaps someday I’ll get a Shaman and Monk this far.  Boggling…

I’ve been doing the Timewalking Dungeons this week because they are helping me bring up my item levels, and they are Burning Crusade Dungeons…my favorites of all time.

Sending in a Hunter, Druid and Rogue, and really love the experience and items gained.  So far I’ve gotten Heroic Versions of The Black Morass, Mana Tombs, Shattered Halls, and the Arcatraz.

The next set of Timewalking Dungeons will be Wrath of the Lich King, not my favorites.  Still these turn out to be a big help Item Level wise.