To my spouse, who was concerned I’d forget and not get in this second-to-the-last-post, thanks for being there.

He’s always there to gather resources, share his loot and coinage, back me up in a fight, work on building a guild, and sail through dozens of dungeons, though MMOs aren’t really his thing.   He’s played Galaxies, Lord of the Rings Online and World of Warcraft.   He tried but didn’t like Rift.  His characters are somewhat larger than life, just as he is.

All my love, in all your incarnations.

I was so surprised to see that Gnome Hunters are coming to World of Warcraft.  Crafty Gnomes!  Clever Gnomes!  They can do anything, certainly wield a bow.   I’m not so certain I like the mechanical pets, though it does make sense.  It sort of takes the pleasure out of finding your own pet of choice in the wild and taming it.

Finding an open character slot is a problem.  It will just have to be on a server far far away than my usual ones.

I wanted to put a picture of one of my adorable Hobbit Hunters here, to show how cute mini-bow wielders are, but I haven’t logged into LOTRO for a bit and of course it’s update hell.

Two more posts and I do believe I’ll have met my goal of a post a day in November.  So close.

I can’t put my finger on it, but for some reason I really dislike Nagrand, the Dreanor version.  Is it that stampede of baddies that sweep down the road as soon as you enter the area?

It is the aggressive animals packed like sardines over practically every inch of the place?

Do I hate the quests?  I can’t think of a single memorable quest line here.

Some areas of the world are just annoying, and after sending characters through, I can’t seem to make myself do it again.  Desolace.  The Hinterlands.    Painful Vashj’ir.  Thousand Needles…ack that one is worst.

My Warlock is at the start of the area. I’ll see if I can figure it out as I go through.  It must be a combination of things.

No game turkeys this year, though I did pick out a game called MegaRace from our shelves as a first pick.  Some spectacular futuristic tracks, with a game show host from Hades that just ruined it all.

I hope your day was as relaxing as mine (after the meal was done).  Keep those turkeys in mind for next year. 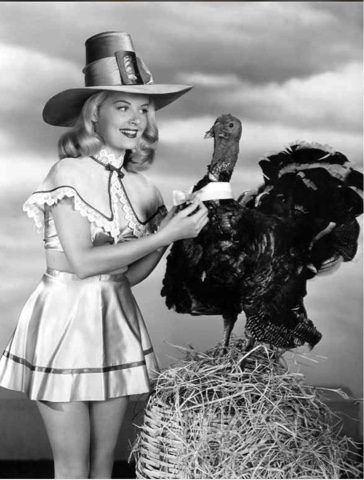 Perhaps tomorrow I’ll have some gaming turkeys for you, but for today, travel safe, eat well, enjoy those you love.

I decided to strike out in an all new direction tonight, leaving Olivia Station for another adventuring day.

Which includes another supposedly deserted encampment.  I was really careful this time, circling, circling in stealth.  No pop up baddies.

For the first time in my mini-travels, I came across someone who wasn’t a Raider.  If I were Ms. Half-Cocked, I would have taken down the woman and her little two headed cow, too.

I talked to her instead, and she recommended I head across the river to a town called Diamond City.  She looked just like one of the creepy guards in the Vault.

I didn’t find Diamond City, but a city called Lexington.

Is this a man in the window or another mannequin?  At least he’s clothed.  It was dark out.

I thought I’d work my way around the building to check for an entrance to check him out.   Suddenly, a couple of Feral Ghouls detached themselves from the roof, and then there were a bunch of Feral Ghouls.  Ghoulishly delightful.

Dog and I were no match for them.

In order to have a shot at them next round, I found out how to use my grenades and other tossables……Hold Left Alt key…

I am also bugged by my failure at the cave…errr, I mean, failure to kill the Deathclaw in Concord.

So I found this video which shows three different ways to get him.  I’m going to go with no. 1 which looks most simple.   I had already been thinking that maybe I should try getting on top of a car or building to stay out of his range.

I retreated home and was somewhat horrified to find Trashcan Carla and her cow in front of my house!  Eeek! I have not made it a settlement in any way.  Eeeek, how did she get in?  I bought the last ingredient I needed to craft a couple of stims and she appeared to wander down the street. How odd.

So after yet another try at the Deathclaw…

I thought, I don’t have to kill this guy before I move on. It isn’t a quest sequence, so off I went cross country seeing the sights.   Almost immediately, I got a notice “You Cannot Go That Way”.  What kind of open world is that?

There’s stuff out there, alright.  Molerats, campfires that look deserted but there are three guys, another nice camp that turned out to have a dog and a Raider nearby.  Oops.

This place looked like trouble but it just had some nice goodies.  The Raider camps made me jumpy, I guess.

Since there was a fire in a barrel, I suspected even more Raiders at Olivia Station.  The upper part was all nice and quiet.  Why are there mannequins all over the Wasteland, why?

In another building, the way led downwards.  For the first time I had an overloaded inventory and had to drop stuff.

I should have scooted home and unloaded.  Come back all fresh. Because the lower levels were rolling in Raiders.  Tomorrow.

So, I’ve never gotten past the opening salvo here. You’re supposed to grab a rifle and pop the zombie before he gets you.  Tried it again tonight and didn’t even manage to spot the rifle, much less grab it.
As much as I love the show, I’m just not able to work my way through the apocalypse on my own.

I generally like the Cataclysm dungeons.  Like any good dungeon, they can go smoothly or horribly wrong.

Not a favorite.  Still, most days an easy run.  So easy that the group discussed the glory of junk/flames/water/ooze/ s*$t that you now have to stand in/run from/avoid every two seconds as a fine game mechanic that helps separate the good players from the bad, who might be sitting at home just mashin’ those buttons and eatin’ pork rinds.

Somehow things went south and everyone died, and not from junk.

Then things went horribly wrong as our dogs got into a terrible fight and I had to bow out.  Nobody was hurt, thanks.  Someone is in the dog house though.

I used to think you were supposed to jump from cloud to cloud in this one yourself, not realizing youre just launched along.  Tsk.

Now its all good.  Except Assad killed me three times.  Zigged when I should have zagged.

It seems like this one is generally pretty simple, but the last boss can drive people out.  With several group changes, this guy wiped the dungeon floor with us till we had to call it quits.  A zillionth of a box from level 99. Must heal up and get more potions.

I believe the goal is 50 for IntPoMo and I count 72 screenshots so I think I’m good.  It is fun to write posts around screenshots, and I’ve seen some others doing fun thematic posts, which I may try after I take more shots with particular themes in mind.

Now my goal is to make it to the end of the month with a post a day.  Though this is pictureless and thus dry and boring it counts towards that goal, well enough.