I was peeking in to do another run to Endor in Galaxies emu, when I saw it was SNOWING!  So beautiful in games, not so much outside in the real world.

While I was admiring the beautiful snow, the old SWG Christmas Music started to play!!!   Such a happy tune!  Right up there with the music from Charlie Brown’s Christmas.

Merry, Merry Christmas to all! 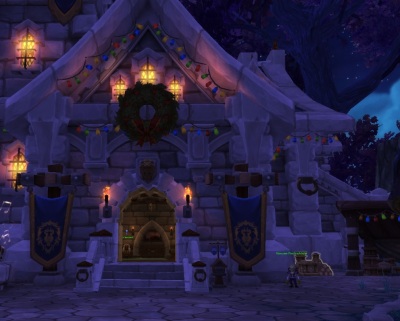 Winter Veil’s Ball of Tangled Lights add big flashing bulbs around your garrison, including inside the Town Hall. 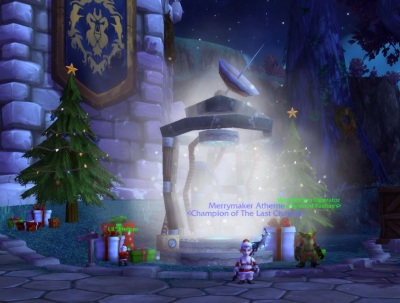 The Little Helpers package adds a  PX-238 Wondervolt transformer near your gate.  It turns you into a festive gnome for a time.   There will also be teeny gnome “Little Helpers” sprinkled throughout the garrison yards. 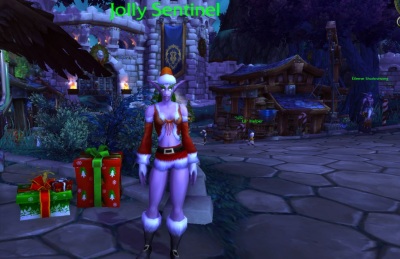 The Festive Outfits package puts these Jolly Sentinels all over.  I pictured all my NPCs wearing ugly Christmas sweaters, but no. 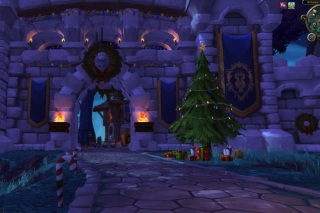 The Old Box of Decorations lines the walkways with candy canes and places wreaths of all sizes everywhere.   I apparently didn’t take a shot of Imported Trees which puts  trees loaded with ornaments and gifts all over.

I started by getting my main character all the packages, and I was using a second character to do the daily quests for the “Savage Gift” which may contain a mount.  As I was being dazzled by character ones’ festive garrison, I thought it sad character two shouldn’t also be awash in Christmas happiness, so I’m having her decorate her garrison to the hilt as well.  So very happy making.  It makes me think once again, if this is the only home we ever get in Azeroth, and they keep adding fun things to it over time, I will be very pleased.


Life Day was a Wookiee holiday celebrated by the inhabitants of Kashyyyk every three years. It was a celebration of the planet‘s diverse ecosystem and the many forms of life it encompassed. It also was a time to remember family members who had died, and the young ones who continued to bring new life to a family. Life Day was a sacred holiday, and many Wookiees considered it their duty to return to Kashyyyk in order to celebrate it. Life Day was held once every three local years for many generations, but during the Galactic Civil War, its importance to the Wookiees became more pronounced. Wookiees were spread across the galaxy, either because they had been enslaved by the Galactic Empire or for personal reasons, and they began celebrating Life Day each year as a way to remain in touch with their history. Over time, the holiday found its way into various other cultures. “Life day” was also used as a term to describe the anniversary of one’s birth.[2][3]

By chance one day this week, I found myself on Vreni Island in Galaxies.

There, what to my wondering eyes should appear, but the Wookiee Life Day Quest giver I hadn’t seen in years.  I’m not certain if some of the other holidays have been in the emu game and I missed them, or what, but, I love the paintings from this quest, and my second favorite character, my Wookiee Architect, loved loved loved the red robe from this quest.  Wookiee wear in the game is notoriously colorless, but here a statement could be made.

The other big thing is, though this quest takes you to Endor (or alternately to Dathomir), a non-combat character could make it from the Endor Research Outpost to the Life Day waypoint without insta-death if they were careful and watched their radar like mad.

Do the quest the same day you take it or the waypoint may disappear from your datapad.

It costs 8000cr round trip to go to Endor, but I feel your chances of success are greater than on Dathomir, which is 4000 round trip (from Coronet).  All my memories of Dathomir say no lowbie can make it to a waypoint even a few meters outside the starport without being crushed. 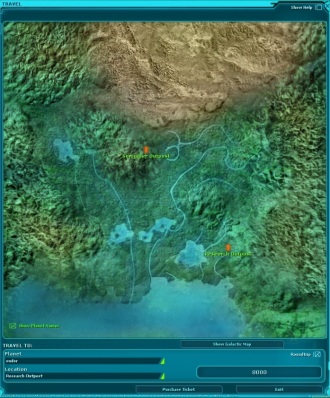 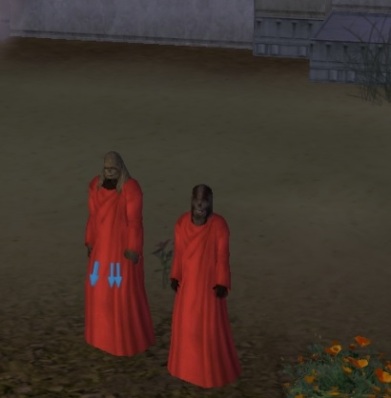 I’ve sent two characters so far, getting the robe for my architect and the Wookiee Life Day Orb for my Ranger. 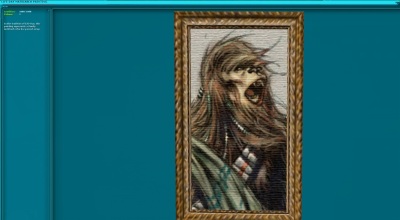 I MUST get some of the paintings!   Somehow I will send my other characters on the quest.

There have also been a series of Grinch sightings on varying planets.  Since he appeared briefly in Coronet, I sent Dustbunnie (occasional reporter for the Corellia Times) to get a picture of him without being killed, as she has zero combat skills.   The Grinch is missing his Grinch outfit, yes. 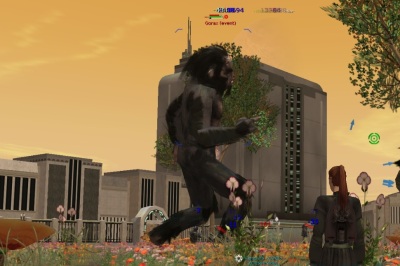 She also spotted Santa slipping through the city. 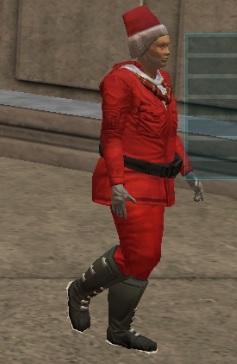 Well that was painless.  I just checked my characters and requested they go to Landroval, and in a few minutes, there they all were.

I thought I might have to rename all or most but only three ended up with -1s after their names, which is great. 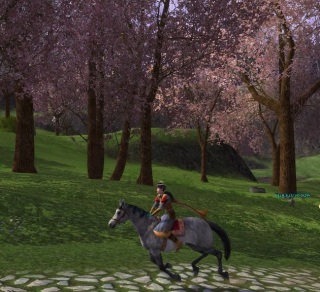 World chat sounded like lots of people were getting settled in.  Kind of exciting, as it was when it was all new.

My Loremaster rode from Bree to Esteldin just for the pleasure of it.

It’s good to be back.

I’ve been in a nice groove again going between my games.  I’ve decided to re-work my Galaxies folks a bit, so I’m moving my merchant tent over by my guild hall.

Galaxies gives you a wide variety of vendors you can make, choosing between terminals, droids or npc races.  Problematically, you were never given any control over how your vendor would actually look.  If you were fiendish enough, you could get some beings pretty close to what you want.  In order to do it, sometimes you might make and destroy dozens, even hundreds of vendors to get something decent.

I want a vendor that looks like my Master Merchant Elsinor Dustbunnie.  Humans are notoriously difficult.  It is going to be a long long road.  I always thought they should be able to give you access to the character creation screen for these. 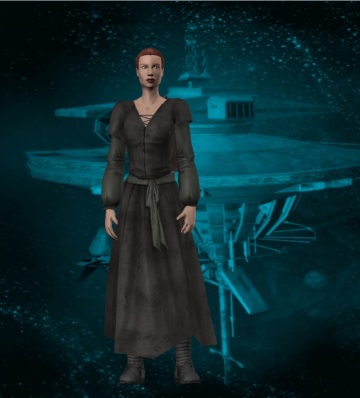 Note my first tries don’t look anything like her.  Not to me.  Look closely to get those scary details. 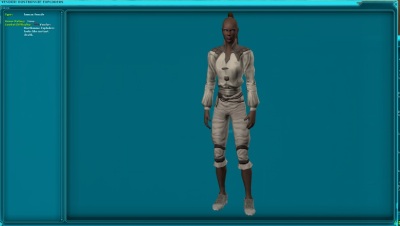 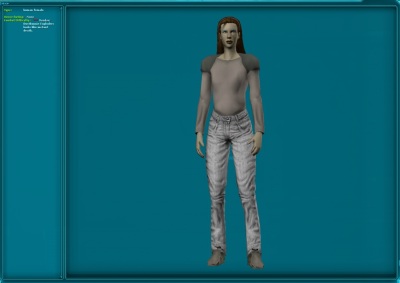 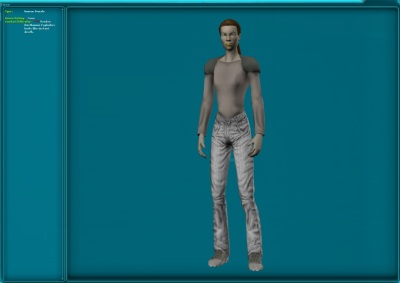 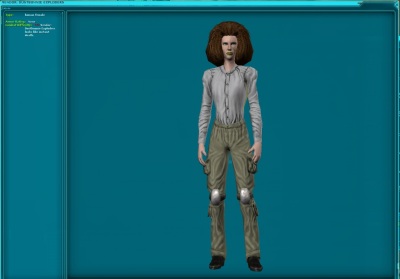 I’ve had this pile of games from my archives waiting for installation for a bit.

Unfortunately, I was getting really low on hard drive space and had to painfully uninstall a bunch of things today instead.
Steam games were an easy choice, because you just tuck those away elsewhere till later.
I regretfully removed Neverwinter, since I hadn’t logged in in a very long while.
No way these were coming off:  Wow, Lotro, Wildstar, Secret World, Rift, EQ2, Guild Wars 2, Fallout 4, Arcanum, Mass Effect 3, Dragon Age Inquisition, Pillars of Eternity…and stuff.
Lots of space now 🙂