I’m doing that thing where I rotate my characters a level at a time.  Tonight was my Assassination Rogue. 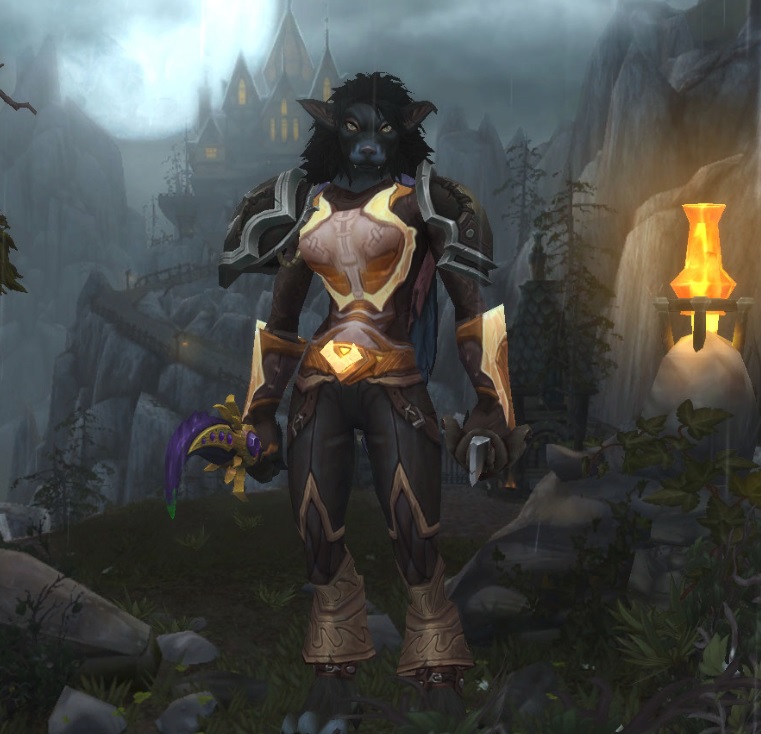 I thought I looked at each character before sending them into the introductory scenario, copying what skills and talents the live version has.  My Rogue seems to have fewer skills, somehow, I have to double check.   Compared to Live, each of my classes have felt “squishy”.   They never feel as powerful to me as those live characters.

Why haven’t I made a Worgen Rogue before?  She has the Rogue and Worgen speed boosts (I call the Worgen one “scootie foot”).

She’s working in Stormsong Valley, a really pretty area.  Each of the areas of Kul Tiras are very influenced by the sea and something gone very wrong.  I find the leader of this area, Lord Stormsong, to be very buffoonish.   I know, who’s talking, right?

The Rogue is my Leatherworker/Skinner.  I found enough materials while questing tonight to make a single item.  The crafting feels more like classic crafting rather than the “got you in a vise grips–don’t try to make anything” Legion.

When you skin a creature, you get a pile of stuff:  Stringy Loins (!), Tempest Hide, Calcified Bone, Blood Stained Bone, and Course Leather.   I love getting a treasure trove of useful stuff like that.

She got in two dungeons and acquitted herself well.   Waycrest Manor and Shrine of The Storm were tonight’s  selections.   Waycrest was pretty breezy but there was a spot in Shrine that was a problem, though I haven’t seen any other group have trouble there.

I’ve been wanting to write about Battle For Azeroth Beta, but am wary that people will think it’s too spoilery.  I’ll try not to be spoilery.

When I first heard about BFA, I thought Oh, no, it’s the PvP expansion.  I’m sure there is plenty of opportunity for those who want to fight it out, but I haven’t run up against anything at all myself, which makes me really happy.

I’m wondering if I tend to like every other expansion.  I loved Draenor (maybe because I never let myself be a slave to the Garrision), and I love this one.  It has the best storytelling and quest writing I’ve seen in quite awhile.  Each area has all these little vignettes that flow nicely into the larger story.

Remember all the annoying kids in Pandaria?  Nails on a blackboard voices?   There are lots of kids in Kul Tiras, but except for one, they’re great little adventurers.