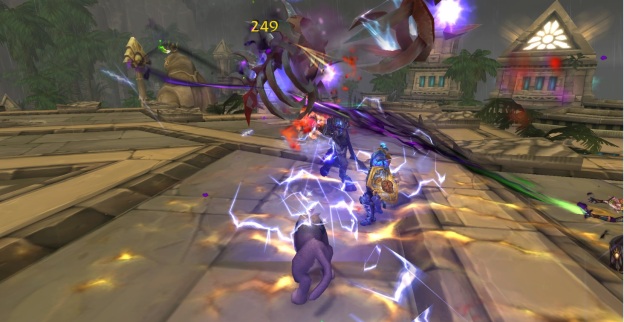 I’m in Power Level Mode with my Blackwater characters. I’m just pushing through quests to level up. I did some Wrath Timewalking last week which helped, but the time spent queuing for BFA Dungeons then going through them just isn’t time effective.

My Druid in fact got from level 116 to 120 mostly over last weekend. This weekend I’m working my Warlock towards 120 with a mere four and a half boxes to be level 119. Poof, poof after that, then on to my Rogue.

I’m doing everything in Tiragarde but Norwington Estates, which I hated in beta, and which I’m just going to bypass for now, moving on to Drustvar to finish up. Once everyone’s 120 I’ll go back to get the achievement and reputation. I haven’t the patience for it right now.

What I think of…

Patch 8.1.5 I’m not seeing any effect on my characters in the mode I’m currently playing in. Nothing to see here.

These two…Ion and Lore, seemed hugely uncomfortable, reminding me of interviews with Star Wars Galaxies developers after the NGE where they looked as if someone off camera was pointing a gun at them.

That said, not much of interest to me except (from Wowhead’s Live Blog) Are we ever going to see increased character customization? e.g. Height, eye color, etc.

They want to do more with character customization, but not on the level of lots of sliders. Height adjustments are probably more difficult.

The two races who have come off the worst with the new character models are Dwarves and Gnomes. This could be corrected without “sliders” but with more choices of eye size, shape and color, more dwarven faces without freckles. Look at the previous eyes and faces and make some of those models available again.

Why don’t see BFA dungeons give reputation for their respective zones?

It’s unlikely at this point. Reputations are mostly tied to outdoor World Quests and they’re designed that way. However, it may make sense for some reputations going forward.

This is designed to make you do the quest lines created for you. There’s also the drop in dungeon xp overall. They want you to do dungeons, but only when they tell you to go in for a craft or some region related quest. Or, as preparation for Mythic Dungeons, which are all that really count. Anytime game developers force you to play the way they want you to play rather than letting you have a choice in how you play, you’re in rocky territory.

What better way to loosen my blogging muscles than with typical utter frippery? I can’t find some other pictures I was looking for, but how about these old things? It appears the Monopoly Card Generator isn’t around anymore. There is one from imgflip, but it hasn’t got pictures or the preferred font. https://imgflip.com/memegenerator/108165899/Monopoly-Card

Here are my old cards:

These are all circa 2010. Never be afraid to haul old junk from your picture files, I say.

Here’s a sample Chance card from the imgflip generator. 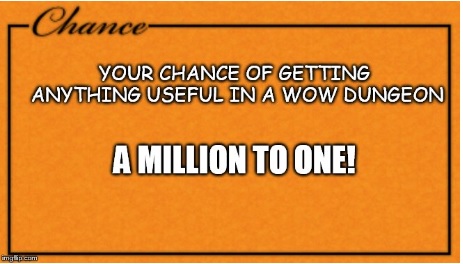 I’m back in the game, questing with some randomness between characters, but letting my Druid go ahead as she usually does. I’m getting some fun crafting recipes, which makes me happy. I had the ingredients to Transmute Meat (?) into a Pet. But I got some wierdo squiggly mass I don’t know how to turn into a pet. It must be like the dinosaur eggs. Will have to look it up.

Goals for March
Level up
Try the Island Expeditions. Maybe I’ll love them.
Work on my various crafts.
Do more dungeons.

I feared the new Zone Guides might be spoilery, showing me exactly where things I’d missed were. Happily, it just is more like an achievements list that let’s you know what’s possible.

I had already been back in each starting area, completing any quests I missed, doing all the delves, finding the Wayshrines, so this was just a help to see what I may have missed. It’s my habit most evenings to just head out along the roads, zigzagging across the countryside trying to methodically find everything I can before heading back with a full inventory. So I fill in lots on my maps. 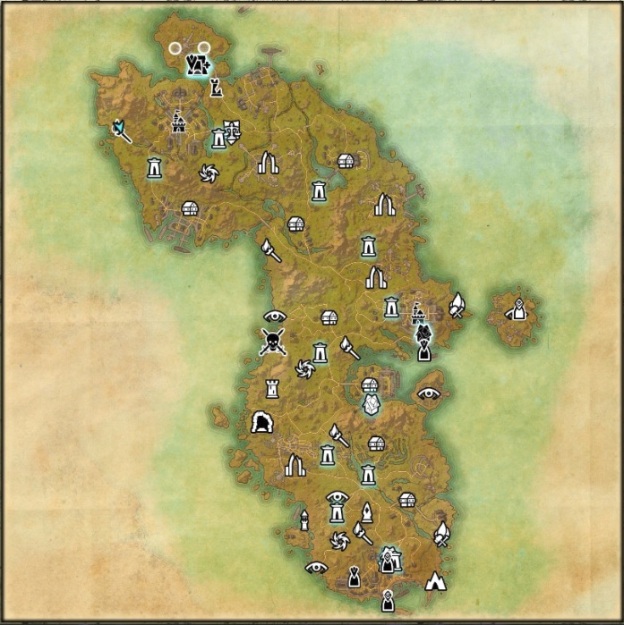 I choose a new character each month to get the Daily rewards and play them a bit. I have my favorites that I switch over to as well.

Get everyone to level 30
Have everyone able to do the Daily Crafting Writs, though I don’t always do them Daily.
Continue leveling Main Crafting Character
Move Crafting character along in the Fighters Guild since she’s a Bow Wielder