This week it’s all about that gnarly level 20 Warlock quest to get the Succubus.  I actually can’t stand that pet, and never use her in the current game.  All that squealing, gasping, whip cracking. So annoying.  Even so, in Classic it’s a Class Quest and so it must be done.

I took the ship from Menthil Harbor to Theramore Isle.  I then wended my way along the road you see part of leading out of Theramore.  Everything in Dustwallow Marsh is way over my head, but I just kept running.  I never died, but lost my Voidwalker several times to spiders and crocs.   Most annoyingly, the map above never filled in at all, even as I made my way into the Barrens themselves where everything was right at level.

This meant running up the road and down the road (The Gold Road and it’s variations) looking for the camp of my quest guy.

The camp isn’t near the road enough so you see the tents or the gold dot for the quest turn in as you run by.  If you’re in Ratchet, you’ve gone too far!  (I did not get that far before I turned around.)

Finally, comparing a Wow Head map with details filled in, to my approximate position on the big blank map, I turned in off the road and voila. 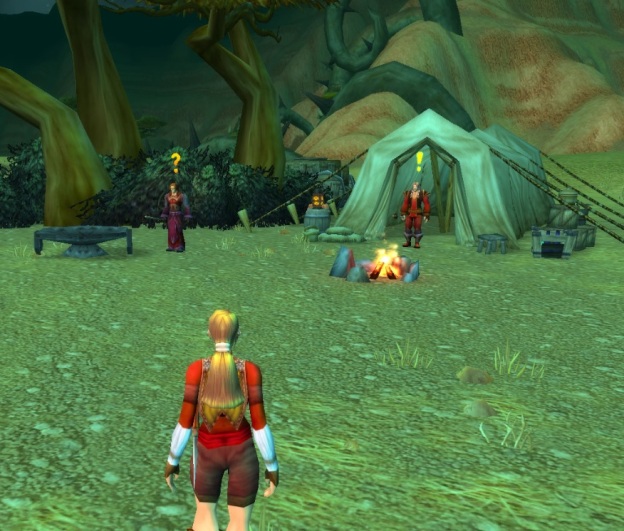 So you make your way across the world to see this guy, and he sends you to Ashenvale.  AGGHH!

Riiight, you say, Ashenvale isn’t far away.  And the moon is in the sky.   After all the time I spent getting to this guy, it took another hour perhaps to find a way through the Stonetalon Mountains, past grubbly little Horde guys, to get to Ashenvale.  I love the Astranaar area, luckily, and have never been so glad to see it.  Done for the night on this quest.

Next log in, I make my way to the Heartwood, with wizards and warlocks galore spawning and re-spawning quickly all around.  You can see the interactive gear when you hover your mouse over the tree, but it’s grayed out, except for a sweet spot on a root of the tree which I finally found.

Then back to Stormwind to fight a Succubus in the basement of the Slaughtered Lamb so you can have one to call your own.  The fight itself was simple and my Voidwalker handled most of it.

Got her, stuck her in a sack, back out questing with the Voidwalker.  Can’t wait to see what the next Class quest for Warlock is.

The story wrap up seems awfully rushed, barely acknowledging the Alliance.    I liked Kaylriene’s summation for the most part   https://kaylriene.wordpress.com/2019/09/25/2503/

and just can’t figure out why they started the whole thing in the first place.   If they allow the Horde and Alliance to work together going forward, I’ll be happy, though I will not say it was all worth it.   With Blizzcon now just a few weeks out, I may get a ticket this time to see the drama of what comes next unfold.