The new Arcade is up at the Darkmoon Faire!  It’s right behind the roller coaster, and is very hard to miss.  It needs to show up on the island map, and have lots of lights to show the way to it, or those great goblin neon light arrows.  The area itself looks very innocuous, with only the arcade machine and it’s operator standing at the front.  When you open/play many of the games, they come up right in that open area.  Other players who are working on games run right through yours.  These aren’t instanced like the leyline games in Nazjatar.

Here are the games.  Just click on the one you want and it will offer a description and tips for the game as well as a Start the Game! option. 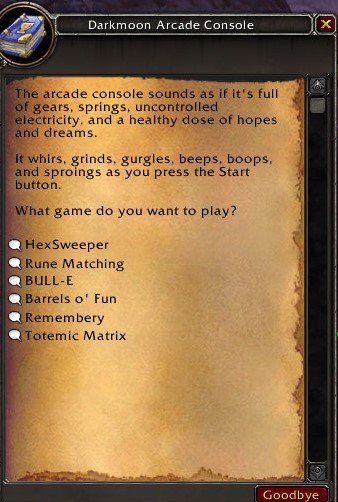 HexSweeper is apparently based on Minesweeper (?)   You get a grid and you’re supposed to identify safe spots vs. the spots that will kill you in a second.  I do not see what the 0s and 1s represent, in theory one is safe and the other not, but I didn’t want to die again to figure it out.  Who knew there was a graveyard on Darkmoon Island? 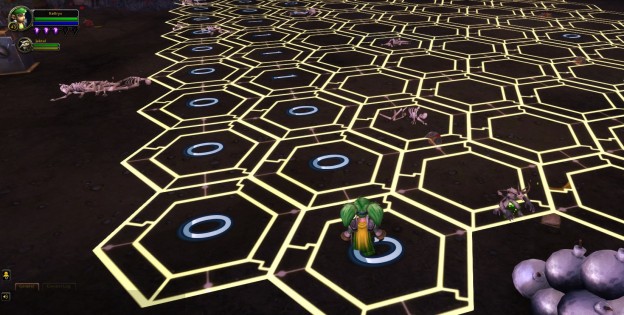 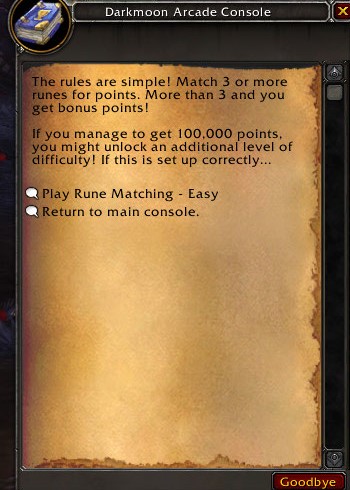 Bull-E Is the Leyline Puzzle from Nazjatar, only initially less torturous

Barrells O Fun is just the old shell game-the actual one where someone puts a pea under a walnut shell and moves it around fast and you’re supposed to pick where the pea is.  Hmm I guess there’s a cup and ball version too.  The arcade version isn’t hard but you’re kind of far away from the barrels and there a bit behind the console…it may be you can just go out nearer the puzzle as you can with a couple of others, I did not try.

Remembery is the in game Shell Game which I love to death.   Like the old Concentration card game.

Totemic Matris sounds so doable in the instructions, but it will be awhile before I conquer this one.   You toggle the totems between fire and water, trying to get them all to be water.  They’re interconnected in groups of four. 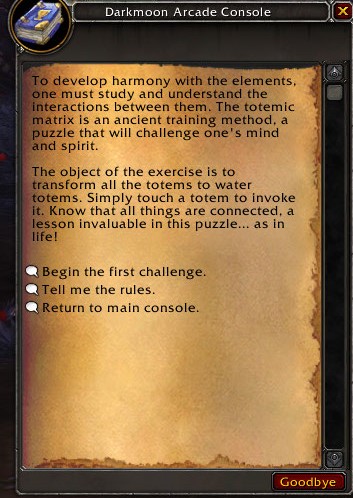