I picked this up at the Winter Steam sale and have just started it.

Norah Everhart is on an uncharted “island of death” alone, looking for her husband who disappeared in June of 1934 while on an expedition to find a cure for her unnamed disease.

Though the expedition was well supplied, she has only found small abandoned supplies and camps (so far).

In classic adventure style, she has a great journal which refreshes your story as you go.

She finds helpful notes left by someone. I liked this one so much, I put it in my own journal I always keep when playing such a game.

My first real puzzle is this combination lock type totem. I haven’t solved it quite yet.

Tab to open journal, up and down, left and right arrows to move around in the journal.

Move in close to get an EYE to look at items, or a Hand to interact.

Somehow I wasn’t paying attention when they said how to SPRINT. Oh well.

In true adventure game style, Call of the Sea maintains tension via the story itself, and the exploration of an unknown land where others have disappeared.

Reminder to self:  Some upcoming games that sound most interesting.

Syberia the World Before      https://www.microids.com/us/syberia-the-world-before-kate-walker-returns-for-a-new-adventure-2/

Blacksad Under The Skin   November 5 2019     https://www.microids.com/us/game-blacksad-under-the-skin-us/

Video games exist in their own universes, telling a story, inviting you into an adventure.  I wanted to list my favorites of all the in-game adventures we’ve had.  My husband and I played all but one of these and more together.  Typically he “drove” or moved us around, while I wielded guns and wrenches against an onslaught of bad guys and monsters.  I always take it personally when my character is attacked, so in addition to providing all the screams, my self-preservation instincts kicked in plenty and got us out of tight spots.   These games formed us both as gamers.

These are my personal favorites:

The adventure of any lifetime in rambling trap filled tombs.  Wild leaps to safety or death, enemies galore, and something I always love, endless ammo.

We weren’t familiar with the first game, so we trusted The Good Doctor Polito, and were shocked indeed by Shodan.   I think we played more than once and tortured over the stats we should pick, making this unlike anything else we had played.  I loved hacking those doors, under considerable pressure as The Many crept up behind you.   The whispers of those creatures, heard in advance of their getting to where you were (insert screams here).   It was so scary I remember us trying to hide on a bunk bed once, holding our breath, hoping they wouldn’t notice us.

Alone in the Dark

Apparently we wanted to be scared more, scream more (truthfully it was always me) so we picked up this haunted house exploration story.  The graphics seem very blocky today, and I’d loved to see them modernize the game.  The story, the music, and a couple of sequences of things crashing through windows  were almost too much.   A mystery to be solved,  finding of clues and objects as you went.

One I played on my own.  I really could have used my husband in the Ayleid tombs, which just were too scary, again ambient noises being the thing.  I had to listen to cheery, upbeat music any time I went in one.  This was my introduction to the Elder Scrolls, I hadn’t played Morrowind or any others then.  I found the world to be rich and life like, just incredible.  I loved going in bandit lairs to loot their goodies.  I eventually had all the houses and they were filled with weapons and armor and alchemy ingredients.  Except for the initial shack, those places were beautiful.   I had favorite npcs to sell loot to.   I’d wander all over the countryside exploring and picking flowers.  I didn’t want to close all of the Oblivion Gates or finish the main storyline because it was such fun to loot those.  I had a crush on Martin so I wouldn’t finish the main story line and leave him to his fate.   I know many like Skyrim best, but Oblivion is still my favorite.  Another game that needs to be remastered for modern computers.

This we played together.  What a great game for being immersed in a Star Wars adventure.  We developed all kinds of strategies for creeping out quick to draw fire then pulling back and making the bad guys come to us.  That’s one thing about a single player game, you can save often and re-do a fight or move, learning as you go.   With this one, I recall we’d just go around the next corner to see what was there, let’s just look at the next level, then go to bed.  One a.m. blam! blam! blam!

I’ve picked out four games from my Steam Library to finally play a bit.  I’ll play them–though not all the way through–just to get an idea of this game I purchased, and to try something new.

I tried it first on my gaming laptop.  No sound, not even ambient.

Not wanting to spoil the game for myself, as I hadn’t read about it in any detail… I also thought something must be wrong because I couldn’t find any keyboard key that let me interact with objects.  Why are you putting in books and pamphlets I can’t read for clues, I thought?

My brief perusal of a game review let me know there should be sound.  A narrator speaking!  I moved to playing on my main gaming pc and it was fine, sound, music, and the narrative voice.

It turns out there is no way to interact or jump or do anything to really explore the environment.  You have to go along the path set out for you, even though, early on here to be sure, there appear at times to be more than one path.

This led me to scrawl a note to myself:  Is exploration actually exploration when you can’t choose a path?  Or is visiting an all new place enough?

The diary entries pop up at intervals.  I’m not certain if these are meant to show you you’re going the right way, or if they just appear every so often to draw you along in the story.

I took a path that I thought would get me to the intriguing working lighthouse with it’s blinking red light.  All it did was take me away from the lighthouse, so it seems.   There’s a small cave that has a circular path through it.

Speaking of Clues.  This has a Myst like feel to it for me, so I’m noting anything that might be a clue in my ever handy notebook old school style, as I did back in the heyday of Adventure games.   I drew out this formula which appears in a shack and again in a cave.  Must be a clue, right?  Is there a Island of Dr. Moreau aspect to all this?

There’s also a picture in the cave.  Random cave scrawling or does it have deep deep meaning?

Coming out of the cave, I start heading up a new path towards the Lighthouse.  The narrator makes me think maybe I should turn around and try to get to the half sunken trawler behind me.   I had tried moving along the shoreline on the old lighthouse side of the river (?) but the screen went black and there were these drowning noises so I backed up.   Maybe things would be better on the side of the shoreline.

Ha!  glug glug.  Black screen. Then bounced back to just outside the cave looking just in this direction.   Worse yet, I’m stuck.  Cannot move in any direction.   That is a thing that can happen in old adventure games.  You do what you shouldn’t, go where you shouldn’t. Stuck.

It appears that you have four chapters in the game and it only saves when you’ve finished one.  If I didn’t make it past their save point, no harm no foul, I haven’t gone far at all and can start again, much the wiser.  Stay out of the water! 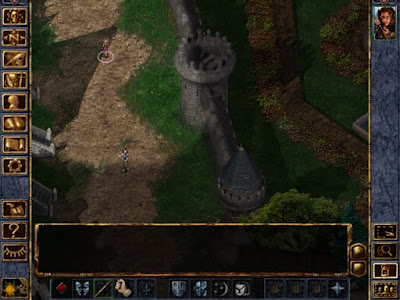 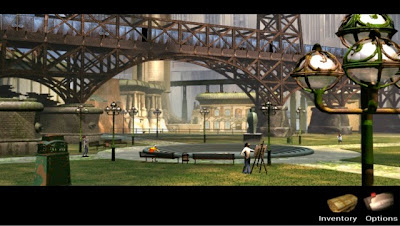 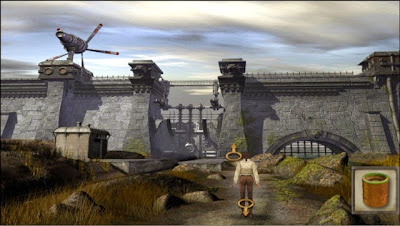 I finally have left the mechanical city of Valadilene after much backtracking.  My companion Oscar the automaton was particularly torturous about taking my ticket.

I am a bit horrified to have made it out of one train station only to be apparently stuck in another. 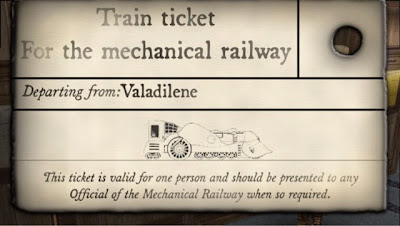 I got truly stuck a couple of times and found help at The Adventure Lantern. 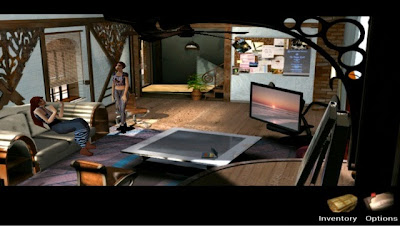