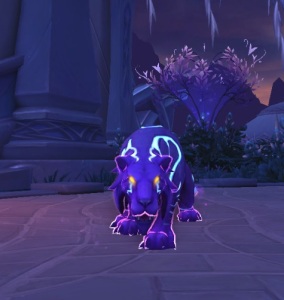 The bulk of this year was spent playing World of Warcraft. Right after Blizzcon 2017, I started leveling characters so that they’d be at max level when Battle for Azeroth arrived. I found as I was doing this that I enjoyed the Class quests more than I would have guessed.

I stuck in my toe in some LFR’s, and they weren’t bad at all. I didn’t feel like there was much of a reward for participating in them, which I suppose is the point. You’re supposed to be in a Raid Guild that only let’s you go along if they’re desperate, and they sure aren’t going to let you have any gear drops, because those are for the real raiders. Pretty icky, in my opinion. At least if something is available as LFR you can just leap in there, and experience the content, since many story lines conclude in Raids, apparently. If that’s actually the case, you might want to tweak that so everyone can complete quest story lines start to finish on their own.

Only seven characters were ready when the expansion arrived, and I sent them through each area in kind of a little conga line. It was good, and then it became grindy, particularly in Stormsong Valley (which I’m still not over).

After taking a break in November/December I’ve gone back in with a new plan, an even better plan (Start the Revolution Without Me). I’m going to run characters to 120 one at a time, leading this time around with my Demon Hunter.

Once again I have to comment on the awful new character models. It would be more palatable if there were barbershop options to change eye size and color, and many more hairstyles and colors available.

I was really enjoying Everquest 2 earlier this year, and subscribed for a time. Somehow I got caught up in trying to work on crafting for each character, and while it was interesting, it felt onerous after a bit, so I drifted away. I’m certain to return to this game in 2019 as I have some really enjoyable characters there, I like the world, I love the quests.

I participated for the first time. I was really pleased to reach my goal of posting every day, and I liked my content. What started off as a pretty convivial atmosphere among bloggers soon seemed rather clique-y to me. It also seemed to me that there was some unneeded competitiveness and bloggers taking shots at others. No need for that.

On the plus side, I looked at some games in my Steam Library, and really liked them, but need to go back and finish them.

As part of Blaugust, I dipped back into some games I hadn’t played in awhile, Lord of The Rings Online, Wildstar, and Rift and Secret World. I enjoyed my time in all of them, and was sad to see the announcement that Wildstar would close. I will try to make time for the remaining games again in 2019.

I started playing this more regularly in September, logging in each day for the Reward. By October, I was playing longer sessions, had truly fallen for the game, and I subscribed. I hope to write about it more, it is so deep and rich.

Star Wars Galaxies (Emu) The other game I’ve played at almost Live Game Levels this year is Star Wars Galaxies, the Pre-Combat Upgrade version. The game remains the most absorbing, live your life in an alternate world experience ever. I’ve always hoped someone would make a game with all of it’s features, but there is still nothing like it.

Return of the The Last Chapter Blog as my Game Blog

It has been a good thing, moving back to my earlier blog. The blog was originally created to share World of Warcraft tips as I was learning them with my guild mates/family. They’re a rowdy bunch, though, and only my spouse always read it. I do like the Pages option at the top for linking to my favorite games and the sites that give guides for playing. That will need quite a bit of work.

I’ve found a bunch of new podcasts to try out, and will work on getting a updated list on the sidebar.

I miss my nice pictures to break up headings on the sidebar, so I’m going to get around that by sticking any picture I want to use on the sidebar in some selected post. Once you do that, it seems to become part of some nice picture archive you can always draw from. Work around solutions ftw.

I’ve added lots of great blogs to the roll.  General and game specific blogs are always fun to read.

I have links to game specific sites and fan sites with pictures of my iconic characters from the games.  I love seeing them there 🙂   Many games don’t seem to have fan sites and some don’t even have well done wikis. It’s a shame.

My Twitter Feed thingie is gone because it is just a reminder that I don’t Tweet, though my gaming Twitter feed of other people Tweeting is most entertaining to read.

Under Game Worlds and News (way at the bottom) are news sites, of course, and game companies whose games I play and enjoy.

I also looked at my January list of games I was looking forward to and added those so I can check on their progress more easily.  I left out the Nintendo and Sony PS4 games from the list since I won’t be playing those.  I must gratuitously put the picture from Yoshi’s Wooly World here because I love him.