I finally crawled my main character to 100.  I could have done it sooner but I had done it over and over for months and bleh just wanted to float.

I’m so happy to have my level three garrison again and I smile to think this time it won’t be taken away.
Now to level the buildings, finish quest lines and dungeon dive.
Last night my Death Knight got to 90 and I took her to the Timeless Isle.  She only found a couple of armor pieces there.  I got twitchy to test her out in Draenor so off she went to talk to Khadgar.
I typically run a DK through the world as Blood and queue for dungeons as Frost. Somehow I’ve just been playing her as Frost and when I went to swap her to Blood for Draenor she felt weaker and as if she didn’t have as many moves.  Maybe I just need to tweak her rotation.
Now that Ms Big is at max, I can move my Warlock, Paladin and Frost Mage along.
Crafting in Draenor continues to be a slog.  100 Hexweave cloth or 100 Truesteel Ingots for a single piece of armor and the most limited list of recipes ever.
Cooking is loaded with recipes which makes it far more fun.  Even my son is cooking with his character and fishing!  Unheard of for him.
An awful armory pic of my DK: 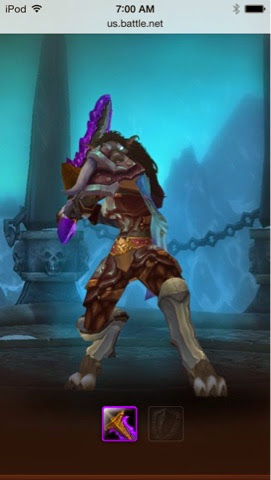