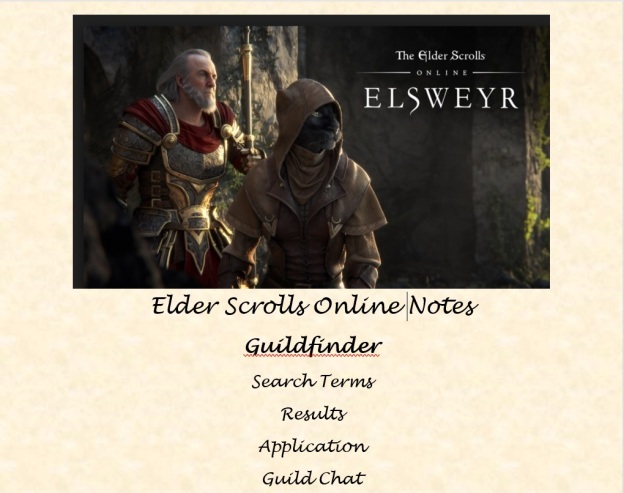 I wanted to take a look at Elder Scroll’s new Guildfinder. You can narrow your search for a guild’s focus by choosing from a list of search terms.

I thought having quest help on some quests would be a good thing, so I searched for those. Open Guildfinder by typing G. Browse Guilds. You get a list that tells you a bit about the guild, how active they are, how long they’ve been around, and if they want you to have a certain number of Champion Points in order to apply. You can get extra information about the guild by highlighting them and pressing E.

Fill out the application form. It gives a little information about you. Since it’s a free form box you’ll need to let them know why you’re applying to them. Not as bad as a real job hunt application, or some online guild applications I’ve seen! 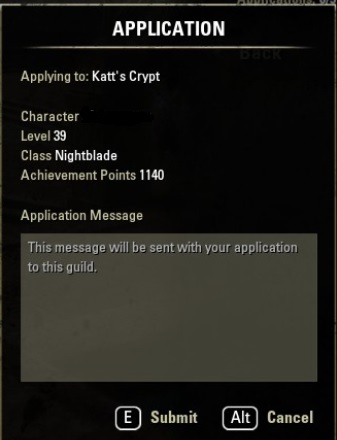 If you’re accepted, you’re added to the guild roster, and your little guild flag icon at the top of the screen will have some actual information behind it. You can see who’s online from this page, what the message of the day is, and if there’s a Discord channel. To my surprise, rather than my character name showing up, my log in name, which also weirdly appears over my character’s heads, shows up on the roster. Also, if one of your characters is in the guild, they’re all in the guild, surprise!

I confess I haven’t spoken to a soul in the game except in Say, but no one ever responds to that. If you’re in the guild, any guild talk comes up in green letters in the chat area. You can be me and change it to Pink via Settings. You have to do it with each character.
I haven’t seen any guild chat at all, yet. Since I had questions, I went to their Discord (after digging, digging for my Discord login). Awkward since the service is in my Atheren name. Not one of my character names! I did get my questions answered, so that’s all good.

You can belong to several guilds at once, but I think one at a time will do. It’s easy to leave a guild, there’s an X to Leave Guild at the bottom of the page. In case this one doesn’t work out I’ve jotted down three more to try. We’ll call the experiment a success.