I spent quite a bit of time last night in ESO, but didn’t write it up.  It’s on my mind though.

Things began with a quest called Pickpocket the Ode to Ethrandora.   Once again I had to play the sneak thief.  Slinking up behind a busy wizardess, I attempted to pluck a note from her pocket.  There was some flashing of numbers, then she was shouting at me.   In giant letters on the screen it was announced there’s a bounty on me and any guard will take me down.  Eek! 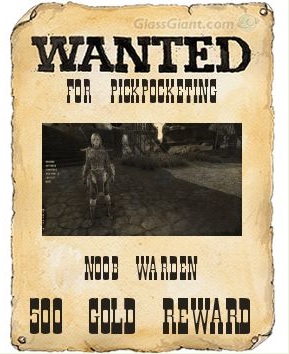 I checked how much gold I had, ran outside and gave myself up to the first guard I saw.   Whew!  9 Gold and I’m Ms Perfect again. 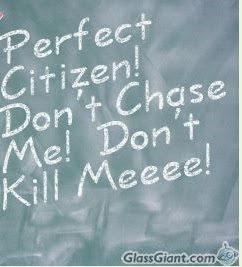 I did manage to pick the note on the next try.  Apparently you have to watch for your chance to be at least 75%
While looking for the next part of the quest chain, I wandered into a quest giver outside the Matus-Akin Egg Mine.   I think I was in there for an hour or more, trying to accomplish the quests.   It seemed as if it were in the middle of nowhere, but there were plenty of people to casually run with.
I was hitting things other people were fighting then tossing up heals, so I thought it worked great.   Others would help me if they were going by.  There was not any, “oh you’re killing my mob” feeling to it, it had a nice “we’re all in this together, thanks for the help” aspect.
I leveled up, got a Skyshard, loaded my inventory…
Once done, I thought dang I need to empty my inventory, but I’m so close to the quest location for the Friend In Need quest which would give me a snuggly inn room of my own.
Wouldn’t you know, the place is another Delve. 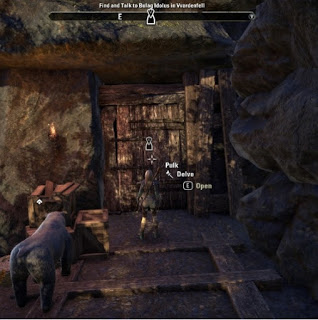 I really like them, but no way I can go in without selling some stuff off.   I’ll have to backtrack.
Before I wrote this I wanted to look up Delves, a very faerie world sort of name.   I didn’t get the answers I want, because I’m not clear what the difference is between a Delve and a Public Dungeon in ESO, even after reading several things.   Trials I get, because I ran across one and it said large groups only, don’t enter.
I did like reading that there is a Skyshard and Lorebook in each (oddly this particular character hasn’t found a single Lorebook, and I didn’t think to look for one here).
Oops, I didn’t realize these don’t scale to your level, so here I am running in there like a yahoo, shooting at everything I see.   I should be careful.

Notice I got my bear after being in the mine as well.  Yay for my bear.   While he doesn’t seem to do much damage, he kept things from attacking me, which was all the extra bit I needed.
He isn’t all cute and bear fuzzy as I’d like, he seems in fact a bit plastic-y.  Still, he’s my buddy, my buddy to stay until he’s peeled up and sailed away  (old Garfield reference).