Adventure Gamers has a post on a game that was a Skyrim mod called Forgotten City.

I’m unfamiliar with the mod, but I like the ancient mysteries to-be-solved aspect of the upcoming release which adds to what the mod apparently offered.

Deep underground in an ancient Roman city, 26 trapped explorers lay dead because one of them broke a mysterious law. Within, a portal leads back into the past, allowing you to change their fate – or witness their deaths in a time loop for eternity. Fortunately, hope remains. The Forgotten City offers incredible freedom, inviting players to manipulate the timeline, Groundhog Day-style, so events play out differently. By talking with diverse characters, making tough choices in moral dilemmas, and thinking laterally, you can unlock vastly different endings.

Modern Storyteller is the Developer/Publisher   http://modern-storyteller.com/

From PC Gamer, a really great Fallout Timeline so you can see where everything fits in, particularly of interest is Fallout 76.  Definitely not our world they’re working with.

Also via PC Gamer  a “social survival” game whose description somehow initially reminded me of elements of Fallout 76.     https://www.pcgamer.com/social-rpg-grimmwood-will-be-out-next-week/

In Grimmwood, you and up to 30 players spawn on a procedurally generated map and have to build a town together. Monsters will attack when the sun goes down, and the waves become more powerful each night. You can explore, gather resources and craft on your own, but as Chris discovered, you end up having to relying on other players to survive.

Looking at the publisher’s website, it seems quite different.  More of an old rpg.  It’s hard to picture how 30 people could interact.  Intriguing though.

Fallout Shelter is free from the App Store, and is absolutely an addictive little game.  You create your own Vault, adding rooms to provide Power, Food, Water and Living Quarters for your tiny dwellers.

I started off promisingly, with potential Vault Dwellers lining up outside.  I added rooms as quickly as I was able to, to make room for more eager dwellers.
Suddenly, so it seemed, I was running low on all resources. I had to take chances, Rushing rooms to release more resources more quickly.  This sometimes panicky behavior resulted in FAILURE.
Failure means the workers will be fighting off Rad Roaches or Fires.  Even though I had many of them armored and holding rather nice weapons, they were almost always ineffective and died.  In one nightmare scenario which began in the Water Treatment room, I lost half of my dwellers as the roaches swarmed the place. 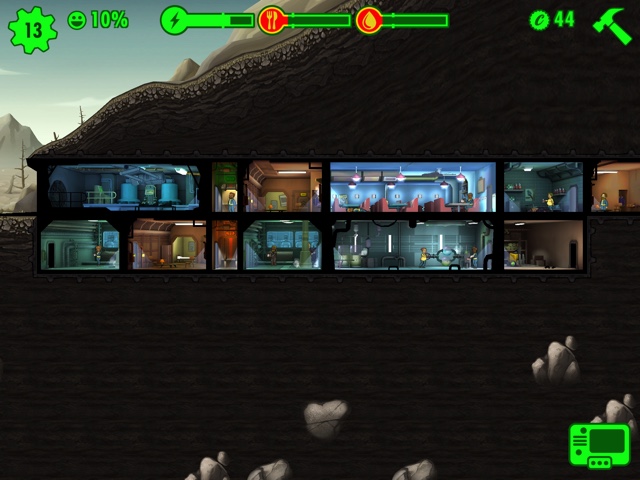 You can revive dead dwellers if you have the Caps, you can even let them lie there dead with their little tongues hanging out and revive them once you save up the Caps to do so.
The Vault dwellers have S.P.E.C.I.A.L abilities sometimes.  They might appear at the Vault door, or be born to a happy couple, or be given in a reward Lunch Box.  Because they have no personality, I just try to revive those with particularly good stats.  That seems a bit sad, somehow.
Speaking of happy couples, you want to send those with Charisma to the Living Quarters.  There, the couple will “court” each other with the all time winners for Worst Pickup Lines. 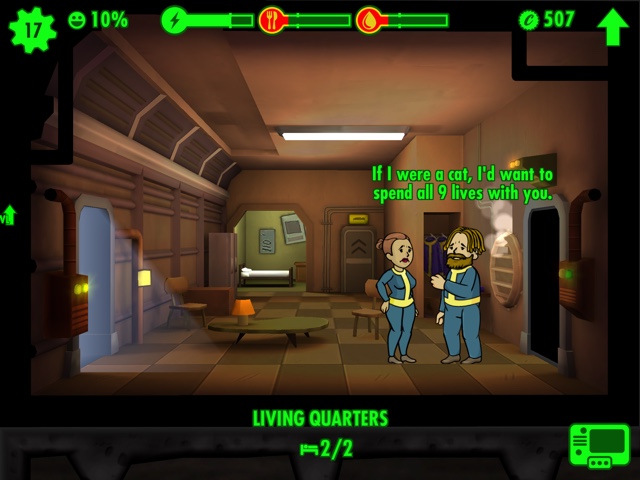 Soon, they go off behind the partition and smiley faces float through the air.  Moments later, they emerge looking as if they’re ready to die. Even worse, the woman is pregnant and remains so for a very long bit of in-game time.  Life isn’t good in the Vault.
My Dwellers are particularly unhappy all of the time. Their mouths are tragically down turned.  You are sort of graded daily on your running of the Vault and the happiness of your dwellers.  I have had a solid F all along. 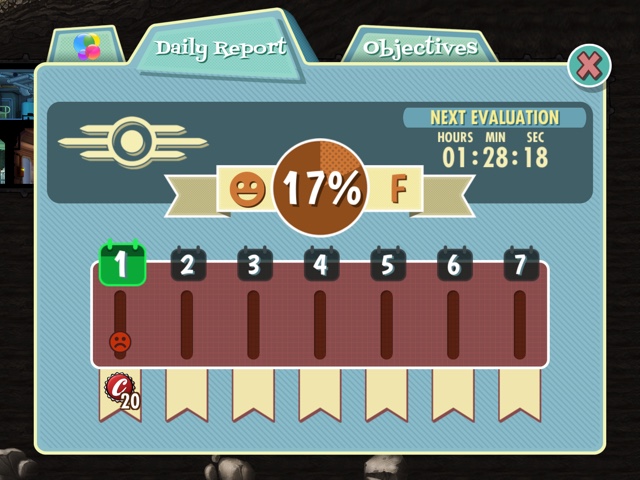 I should be discouraged, and after dwellers go down like flies I have bad thoughts of Rushing every room, destroying the Vault, and starting over.  Then I peek in to see how things are going, and a few folks have leveled up, and resources are ready to distribute.
We’ll try to survive just a bit longer, I think.