I am having to level my Frost Mage to level 50 because she is the tailor and we need netherweave bags without buying them big time.  I need level 50 to advance and she is almost 46.  Since the big patch she is so underpowered I’ve had people whispering to me in dungeons asking if the class has been nerfed 😦    She might as well trade in her Cone of Cold for a Cone of Shame.   If you look at guides for the class trying to develop a good strategy and rotation they are as always all for level 85 and talk about skills I don’t have.  Not so useful.  I have been just alternating between Frostfire Bolt and Frost Bolt because they do the most damage, tossing in Ice Lance now and then to finish things off.

I was so desperate, I tried out the Arcane Specialization (again I haven’t any of the skills the guides recommend) and tested various rotations on the little pony-dog creatures in the Eastern Plaguelands.  Dead dead dead, no matter the rotation.  It might be that my character from another realm just isn’t properly equipped as part of the problem, but eek.  I switched her to Frost and much better survival.  Argh I say.

My right hand man has been unable to play at all since the patch because of terribly distorted graphics.  We have tried every posted solution.  Put in two tickets.  First ticket just went away, no response.  Waiting on the second one.

I dislike the new loot drop system where you pick up anything in a area all at once. I see what it is trying to do but frequently because of some sort of landscape or clipping type issues you can pick nothing up.

I’m feeling like I don’t like any of the classes since the patch.  I dislike the Talent and Specialization changes.

Pandaria is next week and I’m not looking forward to it because who knows what additional problems that will bring?  This is the first time I have thought the game is buggy as anything for many reasons.  So much for “Polish”. 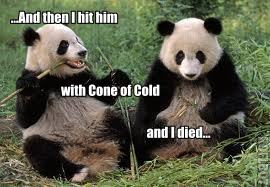