I’ve actually played a few other games than World of Warcraft, but it’s not easy tearing myself away. So much to do there.

As we know, I re-subbed to Elder Scrolls Online, and I did pre-purchase the High Isles expansion. I’ve been making my way through Blackwood, but I’m just at the beginning.

I loved being back right away, and found the quests to be so well written and immersive, and just loved the NPC’s actually talking to you in such a personal and conversational manner. June goal, play my Khajiit in Blackwood more, send my highest character in ESO to the High Isles.

Playing Elder Scrolls Online always makes me want to play Oblivion, but I never do. This time, I made a Breton Mage and sent her out through the sewers then out into Tamriel. Though I was enjoying using magic much more than I ever have with a character, she kept dying all the time and it made me crazy.

To be fair, it is almost certainly because, when attacked, as you often are in this game, out of nowhere, my instinct is to whack the attacker with my sword, not go whoosh, whoosh with a spell. It just doesn’t do the job.

I kept the save of her, but started a new game with a Battle Mage character. Sheesh. It seemed to me to perfectly fit the way I actually play. But when I looked up tips for building the character, it was all sneer, sneer, what a brown mound of poodoo you are for being a Battle Mage.

My son said I should ignore all that. It’s a single player game, he said, do what ever you want.

I’ve still died a few times with this newer character, but I’ve beat the Highwaymen who have popped out, so likely I just panicked and died because of it.

I don’t like that this character runs out of Magicka very quickly.

This time around I dropped off the Amulet of Kings with Jauffrey pronto. Though I said this time I was finally going to play through the whole main quest line, even if it does in Martin (sniff), I am avoiding Kvatch like mad.

So…why is it always night time in every city when you go to sell your loot?

Why is it always cold and windy with a driving rain?

WHY do Imperials come jumping out with robbers and wizards so you panic and whack them so they cry MURDER, and I’M ON YOUR SIDE. Get. Away. From. The. Bad. Guys. STOP JUMPING OUT AT ME.

So there I was, on the Road to Cheydinhal, heading to do my first Fighter’s Guild Quest. It was foggy, dead gray impenetrable foggy all the way from the Imperial City to Cheydinhal. Halfway there, two bandits attack, then there’s a third. I’m using my sword as fast as I’m able. Of course one is an Imperial.

I reloaded and deleted the save with them in it and next time through there were deer and wolves.

Again, my son, who seemed so wise above thought it was great I killed the Imperial because now I could join the Dark Brotherhood. They come to you in your sleep if you murder someone, you know. I do not ever do the Thieves Guild or Dark Brotherhood. Gross, gross.

This game, though, is as great and addictive as it ever was.

I really loved the TV series Halo, and loaded up the game to see if I’d enjoy it. I did but haven’t gotten far. Certainly farther than I have in the past.

I’d like to move my Loremaster and Burglar forward here. I will try to spend a tiny bit of time in Mirkwood with my Hunter but, agh.

Except for in World of Warcraft, my August Gaming Goals were a bust:

Windwalker Monk to 120   Yup!  Got a 120 of every class now on Blackwater Raiders

Paladin, Proudmoore to 120   With ease!  Paladins at higher levels are easy!

I got all kinds of achievements.  Notably, thanks to my son deep diving into Allied Races, I decided to try for the only one I want, the Kul Tiran Human.  I have the Exalted Rep, had tons of the Tides of Vengeance quests done,  Have Loremaster of Kul Tiras.  Needed Pride of Kul Tiras.  Finished Tides with ease.  Did the Pride of Kul Tiras sequence, and I really liked Jaina’s story.  I’m glad I finished that out.

All I need is a Nation Divided.   It turns out in order to get that, I need to do the Siege of Boralus (raid) which you can now queue for a heroic version of.   The less said about my initial try on that the better.   I’m going to have to watch the play throughs of it a few times and try again.

So close to my girl, who will look like this:

I noticed how huge the rewards were for the 7th Legion stuff while working on Tides with Ath, so my Mage is working on the War Campaign as well as World Quests.  She is comparatively low on item level (389) and Neck (41) but her fights have improved incredibly, and my Mage, if you can imagine, was able to take on five mobs and take barely any damage.  This has never happened for her.

Complete initial questline and begin Greymoor with Nord Warden.    I did not. When it was on sale during Gamescon I did purchase the expansion though.

Do a minimum of five quests with my Hunter.  I think there were still problems when I tried logging in so, nothing here.

Pick any five new games and see what I think.   None at all.  They’re calling to me, (as my mother in law would say), but not loudly enough.

I hoped to spend some time playing my Hunter, but game outages made me set this goal aside.

I hoped to get my Warrior, DK, Monk and Shaman to 120.   The Warrior and DK are at 120, and the Shaman at 115.   The Monk remains at 101 but I did take her for a spin (literally) in Aszuna.  She seemed to have power, I’ll just need to arrange the toolbar in a feasible rotation.

I hoped to get all the daily log in rewards.  Nope not by a long shot.

The Greymoor pre-questline is still not completed and I haven’t purchased Greymoor.

I meant to try out more of the games but haven’t.  August will be the time for that, right?   I purchased more games, which I won’t list because my spouse commented on the list I did post “That’s a lot of games.”   I tried to say many were less than ten dollars, but, well.  I got a few more.

I like reading gaming goals so I should write some.  I used to dislike doing them because at month’s end there’s a Cone Of Shame situation considering all that didn’t get done.  Now, I say, so what?  It’s better than nothing which is what I have been doing.

I’m back somewhat playing my Hunter in Mirkwood.  I had a few moments where I thought I’d finished the area and could go somewhere less dark and dank. No.  I think I crawled from the Mirk Eves to the actual Mirkwood.  It was so dark I had to go into my settings to lighten it up so I could see.  It is awfully pixelated too.   Still, as long as I can ignore my Legendary Weapon whining for an update, I’m enjoying the game.  Gotta love those 20,000 goblin camps, right?  My goal is to move her along, someday leaving Mirkwood.

I’m power leveling characters left and right this week thanks to the xp boost and back to back Timewalking in the Burning Crusade and Wrath of the Lich King Dungeons.   A hunter on one of my side servers lead the charge to 120, and it’s been a blast just dungeoning away.  I even got my BWR Priest to 120!  She only needed two dungeons worth of xp to get 120.  Luck of the dice, she got Utgarde Pinnacle and the Pit of Sauron.

Goal wise I’d like to try to get my Warrior, DK, Monk and Shaman on BWR to 120, a Paladin on Proudmoore and another Hunter on Earthen Ring to 120 then I’ll be pretty happy.

I’ve been just logging in for the dailies for awhile, and not even accomplishing that.  April and May were lost months for me across the board.  Getting them this time!

My Nord Warden has begun the Greymoor quest chain, though I haven’t purchased the expansion yet, very unlike me not to have done so.  I’d like to finish the initial quest then, purchase Greymoor and off we go.

Tidy up my Steam Sale list and try out all the games.  Last sale I was being good and just looked at a few I meant to play.  How did that work out?   Nah! Just get in there and take a look.  So far I have purchased:

Gabriel Knight 2 The Beast Within

Night in the Woods

Day of the Tentacle Remastered

Goal: Play a bit of each and write something about them.  It’s all post fodder, folks.

I’m going to try Game Goals for July.   Modest goals to be sure!

Gear up the Fabulous Seven in preparation for BFA.

Get Shaman, Hunter, Warrior to level 100 and to the Broken Isles.

Lord of The Rings Online

Try to work the Burglar all the way through the Lonelands, finally.

Do the unthinkable and buy bank space because, she is the also the cook, and all these tasty treats are filling her bags, that I’d like to just store away.

Get that poor Warden out of the starter area.

I’m currently subscribing, and one goal will be to play enough so that I know if a subscription is valuable for the way I play the game.

For as much as I’ve dabbled in the game over time, I feel like I know almost nothing.   This week I was in Qeynos, wondering why I couldn’t find where some of the quests even were, ones I’ve been looking for for awhile, and I come upon a travel bell sort of thing that is specifically for travel within Qeynos.

So with no indication at all I ever saw, I’m supposed to think that there is a portal to the areas where many of the beginning quests are.  And there’s no other way to get to them.   I just can’t think of a game where there are these “bottle areas”.

On the other hand, the game reminds me very much of Action/Adventure RPGs of the type I always loved.  Quests tell stories.  I appreciate that.  There’s much to like that isn’t offered anywhere else.  Great adventures await. 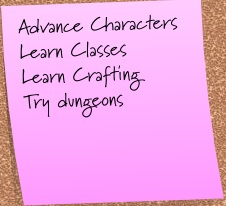 In a game where you can have 50 characters, it’s hard to narrow down what might be worked on in a given year.

Currently, I’m backtracking to get all the Loremaster Achievements I don’t have.  Whoo hoo, Un’ Goro Crater.   I dislike the intense green of the place.  The dinosaurs are cool.  It’s a big bowl and it gets claustrophobic in short order.   I looked through characters I thought had done much of it, but nobody really had much.

I changed all of my Frost Mages to Fire after getting one to level 40 on a newer one.   My current favorite is my 108 (?) now Fire Mage.   I still wish she had some built in heal, but she’s doing incredibly better than she did as a Frost Mage. 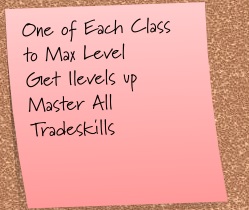 The game itself should break the silence barrier between Horde and Alliance.  Hate it.