I have been finding the whole Garrison thing to be a grind since I have four characters needing to do these things daily.  Grinding towards a specific goal is fun, but just slogging along repetitively….agh nooo.   I don’t mind grabbing my Garrison cache, but every other thing seems annoying most days.  I particularly dislike Work Orders.  I just feel like I’m dropping resources down a chute and nothing of interest comes of it.

I’ve been working on my Leatherworker who is a Rogue.  Astonishingly my Rogue (!!!!!) has reached level 80.  Somewhere along the way she became a better fighter. People in dungeons stopped yelling at her and trotting out DPS numbers.  My girl is UBER now.

She could go to Hyjal but I’ve become caught up in a Storm Peaks storyline I’ve never done before.  One of these days I’m sending a character through Northrend to do all quests in all areas.  It always happens that I start running dungeons along side of quests and bang, time to move onward.

My Warrior is in Hyjal. She is my Engineer and I wonder if she would get some interesting Engineering parts in Deepholm.  I can’t get there till level 82 it seems so she is stuck.  I’ll get her out before the Outhouse guy, I vow.

In truth I’ve been through Hyjal eight times at least, and it’s okay. A relatively fast place to level but there are a few parts I just don’t care for (The whole Outhouse Guy set of quests, the guy in the cave you bring out through a dream sequence and he betrays you…annoying sucker).

While getting Obsidium for my Engineer recently, my DK completed all of the Vash’jir quests.  Every single one.  I vowed not to send another character through there.  Beautiful area, tons of Obsidium, Stormvine and Ashara’s Veil.  The quests went on endlessly.

This morning I thought, I’m just going to go ahead and play my Main of Main characters, my druid.  I went to Ashran and bought Treasure Maps for Shadowmoon, Talador and Gorgrond.  Did all her Garrison stuff.  Sent her out into Shadowmoon. 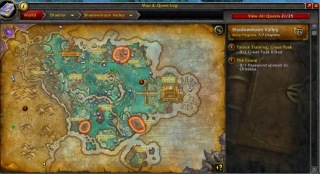 Honestly, I thought I had done a pretty good job of finding treasures as I went along but I appear to be a real piker.  It is fun to track them down.  As I hoped once you get the treasure it comes off of your map.  Although there is a Bubbling Cauldron in Gloomshade Grove I just couldn’t see in the landscape.

While I’m out here finding these, I can get timber and herbs, and work on that Archaology I meant to master.   I found myself to be very happy to be playing my favorite character, and just be out exploring and treasure hunting and resource gathering.  These are some of my favorite in game activities.

Speaking of oddities, you say, for a few weeks I’ve had the longest log in times as the Encoding Table and Residency are checked and then I get a all red realm list but I can bring up my characters. I’ve submitted bug reports and was going to submit a ticket, but if you say you want help with logging in they want your Secret Question.  Good grief. Who could guess what I used?  Way back when.  Are they nuts?   Sigh.