I was discouraged after finding I was no closer to entering Moria with my Loremaster than ever due to the necessity of gaining ten levels for her Legendary Staff. I let the game sit since my last post, then decided to find the strength and stamina to grind it out.

I only had one quest I hadn’t done in Eregion, so I did that.

Also in my log, a Chapter Quest, What Is Needed. It took my character all over Middle Earth. I am certain I used to have many of the Stable Master locations in the past, but now they must be re-built.

Gath Forthnir Stopped cold in the quest line here when it becomes a Fellowship quest.

Back to Eregion to walk from encampment to encampment killing everything in the path of my character till voila! The Legendary item was level 10.

It wasn’t really as bad as I thought the grind might be.

Back to the Forges of Lothlorien. Reforge Weapon. Back to Eregion.

Finally we approach a real fight with the Watcher.

I remember this fight very differently. Here, there were just tentacles popping up, easy to vanquish. It’s hard to get a screenshot that isn’t full of Swampie, who hogs all the shots.

At the the Door at last!

It is odd, but this is only the second character I have gotten into Moria. I’ve been trying off and on to get her into Moria for at least a couple of years. I was so happy and proud!

The many many things you need to do and the places you need to go are almost overwhelming. Getting in that door, indescribable.

Then! A dwarf wants me to go back outside! Are you so joking! At least it was in honor of the Fallen.

I spent just a little time doing a few introductory quests, to soak up the glory of being there.

I love the maps. I think since it is easy to get lost here, I will print out each area map and make notes on it as a guide.

As I’ve been playing again, I’m remembering that I really loved the game till Moria, and it was my favorite part–after Moria the game seemed like a linked chain of goblin camps, and I never cared for it. I’m hoping going through Moria and eventually out the other side fresh, that I’ll like it more and can move beyond Moria to greater adventures.

You’ll be pleased to know on my second try, the Fall of Moria scenario was not buggy, and was simple. The Balrog/Ancient Evil was pretty great, though I didn’t have to fight him.

Naturally, I thought I was getting somewhere. Nope, in fact, nope.

Pick up some stones.

Pick up some branches.

Go back to Filgogan and see what’s affecting the local wolves.

Stop dwarves from tossing stones into the Black Pool.

Chop at a couple of stones at Durin’s Door.

The Watcher pops out, tentacles everywhere. I remember fighting this thing, then entering Moria.

You have to make a run for it and go back to the base camp for help.

Some dwarves found a cache of Legendary Weapons!

GO TO RIVENDELL to get help with it.

Once you’re all set up with the weapon, you’re told you can’t use it to defeat the Watcher till you gain ten levels on that weapon. You merely need to use it in combat, but what? That’s crazy. Why not let you in the door, there are plenty of things in Moria to level with.

I’m at a loss as to how I’m supposed to pass the time. I guess I’ll look it up. It’s midnight though, and zzzzzz.

I thought my girl would be in Moria, by now.

Though I got lost in the Brackwater.

The map for this cave was much better than the last.

I found all the Dwarves!

I also got a Deed for killing Lizards. There are so many in here. I could see how I had gotten in the habit, back in the day, of killing everything I came across in this game. You just could not advance in any direction if you didn’t. At the end, I had to port to Echad Dunann, then ride back to the cave to turn in the quest..

Only to be sent to Echad Dunnan to talk to a dwarf there about the Fall of Moria.

So that’s never good, having the quest say “do not fail”.

Suddenly you’re Nafni, a dwarf. Running back and forth the long distance of Durin’s court. Good thing they give you sprint.

Durin must show some Elven visitors that his supply of Mithril is sufficient. Down to the caves below you go, killing a few things to show your hospitality.

Then you and another dwarf tumble down a wall to reveal that Mithril. except, its a monster behind the rock. And you’re stunned! And you stay stunned!

Then you’re popped out of the game! You try to get back in fast so the instance doesn’t re-set! No such luck.

I haven’t gone back in to try again yet. Sigh. Moria or bust!

I found the Secret Road with relative ease.  It was disappointing as a Secret Underground road, just very dark and twisty.  Orvar was impressed, but I couldn’t see much of anything.

Then I take on a level 60 semi-elitish thing like a scorpion without the curvy tail they usually have.  I could have beat him, but my controls froze up.   As these things go, the monster could still attack.  Then I was dead, but everything was frozen and I couldn’t even get out of the game.

I finally exit and go back in, and I’m way back in the Great Delving, 860 frustrating meters away.

I’ll come back to this another time.  I ported to Lothlorien, which has never looked so open and beautiful, despite the whole yellow thing.  Lovely Lothlorien.

I’m pretty tired, so this is a bit hinky. zzzzzzz.

My Level 61 Hunter has a quest sequence in Moria.  This should have been easy, but somehow all my saved Stable Master locations are gone, and I spent two play sessions trying to get from the Chamber of the Crossroads or the 21st Hall (Followed the snaky road at the bottom of the map from the Chamber) to Tharakh Bazan.

It looks simple on the map.   Just go here, then over there, then take a left and a right.   Hahaha. 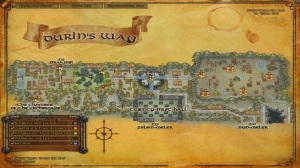 What looks on the map like a pathway turns into a solid wall or dead end.  The place is thick with orcs, goblins, morrovals and crows.   Every time I stop to look at my map, I get whacked by something.  It’s all ten levels lower than I am, but still, pretty annoying.  Let me read my map!

At one point I had a bad thought, wondering how the designer of this twisty maze of a place sleeps at night, knowing people are running into walls, chased by goblins, muttering “I can’t get out…”

I started at the 21st Hall tonight, because where I left my character last time.  Looking closely and reading the quest text again, I went back to the Chamber of The Crossroads and inched my way up, finally getting to Tharakh Bazan.   I remember the first time I saw this area, it was so cool to find an area of lush gardens deep underground.  Right out of Journey to the Center of The Earth.

The objective is in a twisty cave full of Globsnaga Skirmishers and Warriors.  Globsnaga?

Even more charmingly named is the Boss Grawulun the Caerog.  I had a moment where I thought I’ve come all this way and this guys going to pound me into the ground.  I will be sad.  Luckily he was EZ.

Off to the Mustering Halls for part 2 of this quest.
I seriously have had this character all over Moria, and I wouldn’t mind  any of the exploration if my previous efforts were still recognized.  Too bizarre.

I watched MJ of MassivelyOp’s LOTRO Pajama Party stream the other day, and somehow, in this particular context, her voice seemed familiar from the game’s beta.  There is no other game I can think of where I’ve actually used Voice Chat, but it was ubiquitous in LOTRO (though I’m not finding it to be so playing now).  In general, I find Voice immersion breaking, but in instances where you’re coordinating group play, it can be useful.

I went looking though my old game notebooks to see if I had commented on any people (because I’m always inwardly observing and noting how people are, in game and out).   Good little tester that I was, my notes were completely focused on the game, classes, and environments.

I’ve been in the Mines for the better part of a week.  Gaining entrance was not easy and some members of the Expedition were lost at the Hollin Gate.  Their loss continues to resonate through the dwarven community as they strive to gain footholds in Moria.

As I make my way through the dark passageways, and through halls of stern splendor in Moria, I see why the dwarves risk so much to reclaim it.  I have never seen such grand architecture, from soaring bridges to monolithic faces carved into stone everywhere.

Unfortunately, the beauty is marred by the dark presence of every evil creature of Middle Earth.  Some familiar foes roam the corridors, and other bent, twisted things appear as you attempt to push forward.