Tonight I decided to move my characters up till they were able to leave the island.. This happened sooner than I expected, at level 8 for my High Elf Fury character.

The last quest on the island was one I had trouble with on another character called the Source of Evil.  My problem was finding totems.  I expected them to look like this: 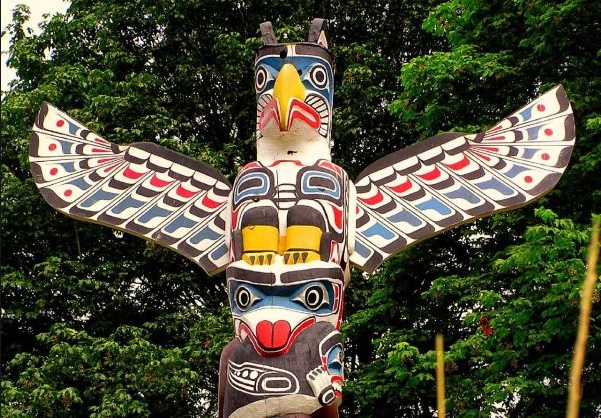 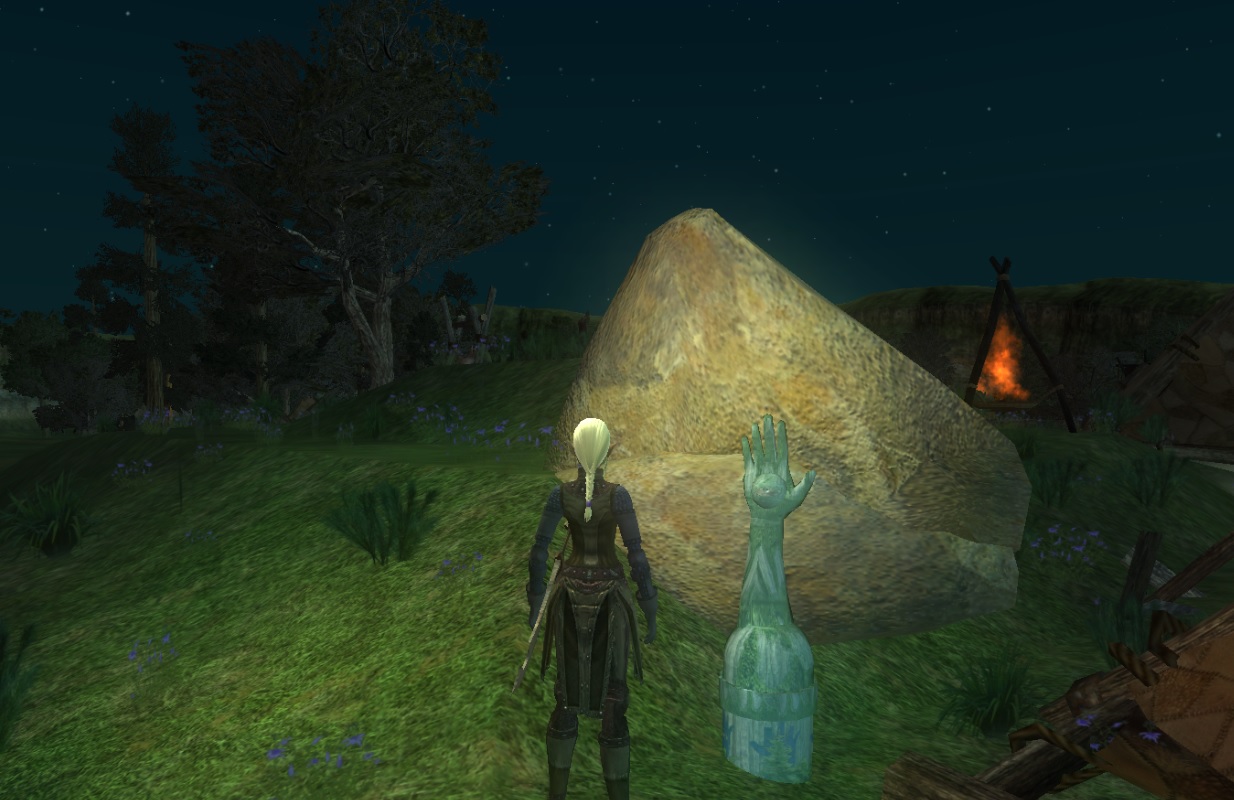 The Flying Finger Of Fate is a Totem?   Ack.

Easy to do once I figured out what I was looking for.   My efforts were rewarded with the appearance of the Dark Blademaster, an npc who was cool looking and had a series of great moves.

After turning in the quest to Sorcerer Oofala  (who was annoying, and I’m sure I’m not the first to think of him as Goofala)  for some reason I was walking backwards for a bit and couldn’t get it to stop.  Awkward. 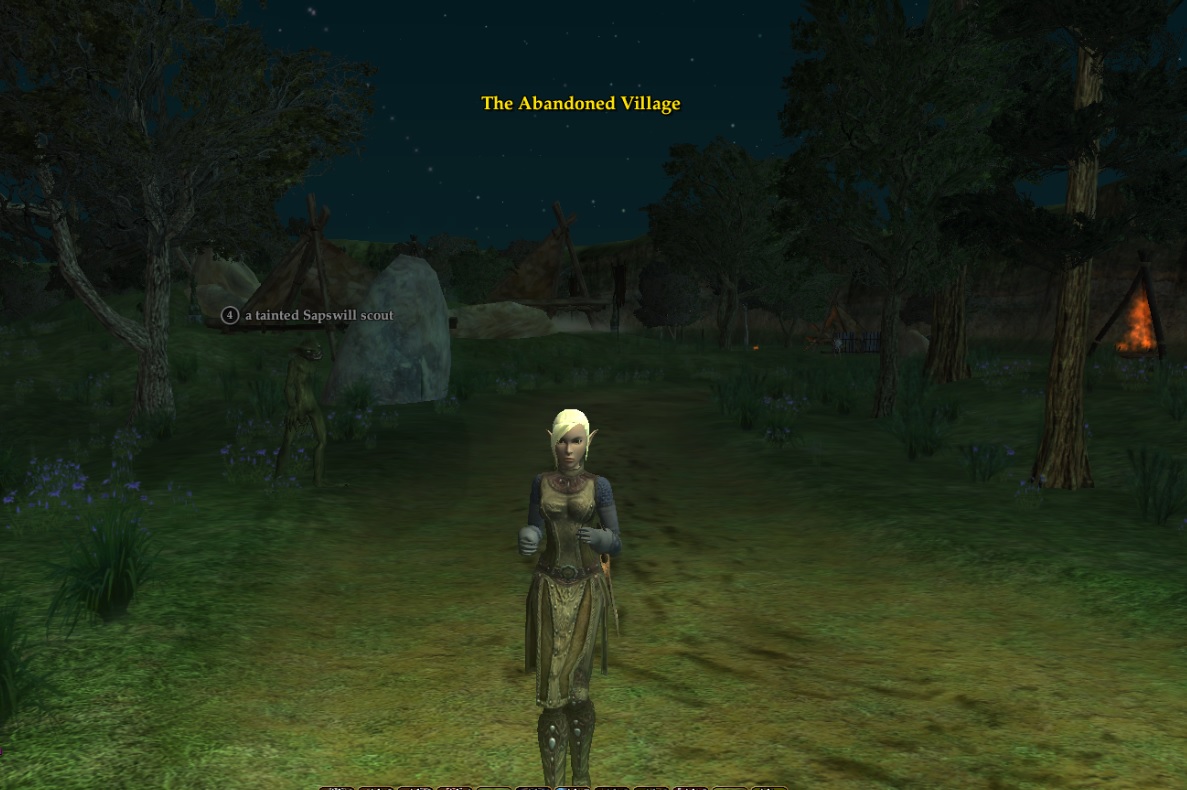 Nicknamed  (by me) Grexx the Giggler, this guy sounds like Yoda with his toes in a vice.  I do appreciate all the voices for npcs, it adds flavor to the world. 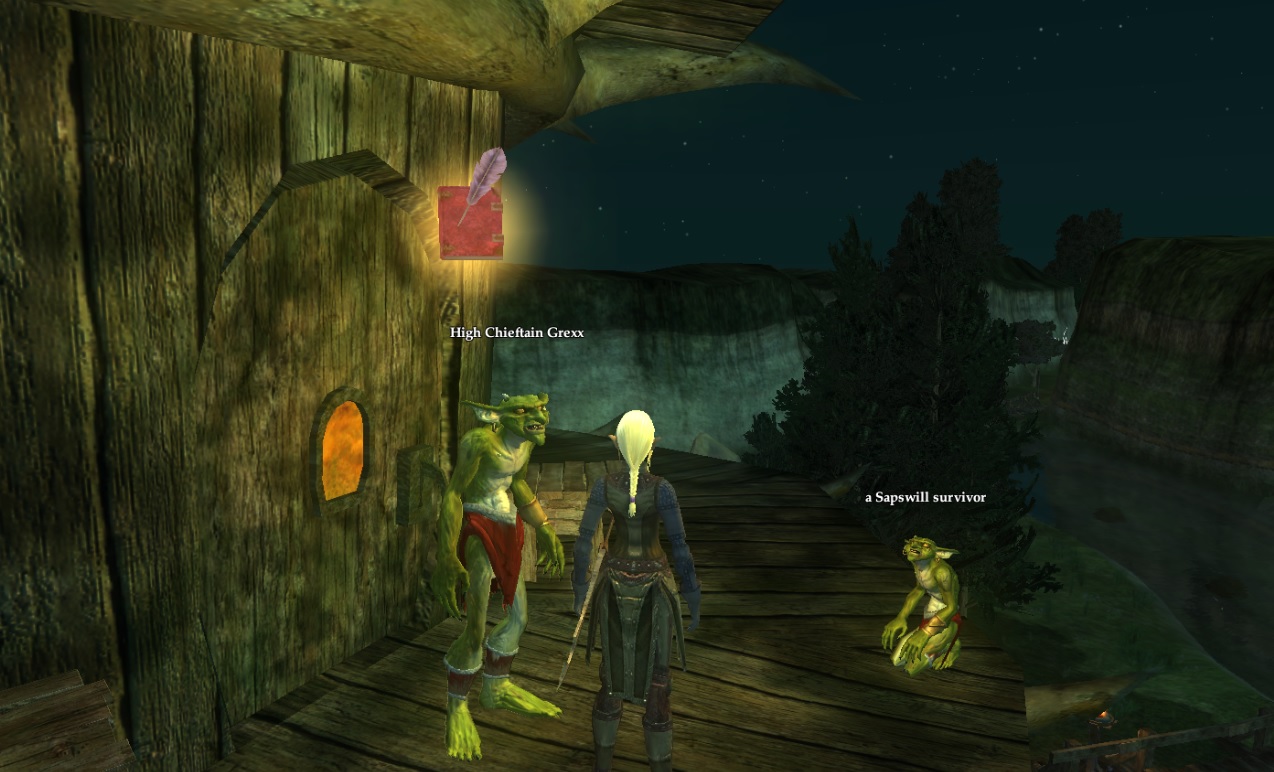 Off to a cave! Not just any cave though, a cave that has a Dark Doorway, and “Fog emanates from the cracks in this door!”   How is that for setting a scene? No disappointment here, Vith L’Tar has an Oz-Like floating head aiding her in battle as well as a couple of minions.  Classy, Vith. That’s the ballgame for this island for this girl, she can stay and whack stuff here, or venture off to Qeynos.  Fortune and glory, Qeynos beckons.  A pretty city.

Somehow it reminds me of Amsterdam.

My first quest here is to find an inn in South Qeynos and look at the rooms.  I actually tried looking at all the rooms, you could just tour them.  I didn’t realize I couldn’t just pick the one I liked.  So I fell for the Three Room Style 2.

As it turns out, this was not meant for a lowly noobulous such as my Elf.   You need gold, status undreamed of with who knows who, and a level 10 guild.  Do you need to lead one, or just be in one?  Not clear, but it seems this large airy suite is not for me. 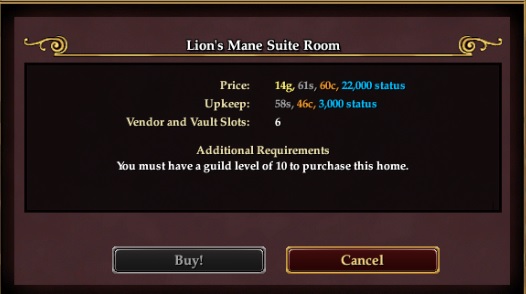 Just next door is a two room apartment that any grubby little character would love for their own.  It actually is nice, with plenty of pretty windows, and the  two rooms are huge.  The quest meant me to have this one, though it didn’t require me to buy it or anything.

I’ve had homes in the past, one in the dread City Of Hate and another in New Halas.  They were ok, but I didn’t like them enough to keep them.

Much more reasonably priced, The Baubbleshire is now mine all mine, with 28 days rent paid. 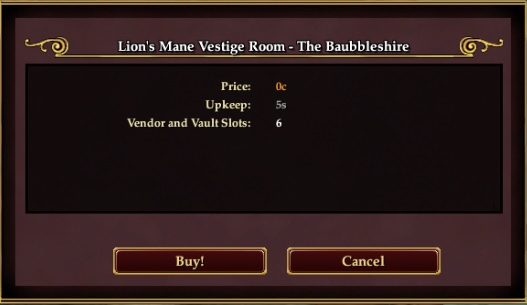 I never noticed it before, but I can make my alts Trustees, and it appears they can share the apartment, drop any cute furniture they find here, and, the scalawags can help pay the rent.  In the past my alts were scattered all over the place, this is the first time I’m sending them all to the same location.

How snuggly!  It holds 200 items which seems generous. I can have up to ten houses, so, if we run out of room here, we can be housing locusts and move on to a larger abode.

It’s 2 am is why I’m being particularly obnoxious.   Sleep well!