And it’s Rift day!  I didn’t feel like dealing with The Guy On The Stairs, so I did the classic thing:  I jumped down from the area starting platform to the area below and started fighting things.

I’m pretty sure this is where my character would have come out if I’d done the more frustrating route: 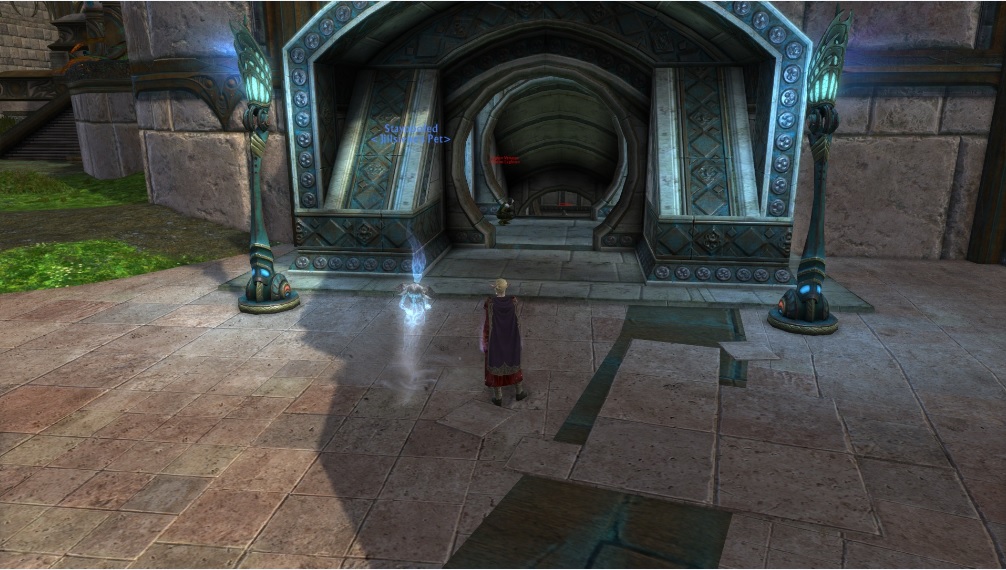 Heading left, I soon found myself in my new favorite thing, a Dead End.   I fought my way through rhinos and demons to get there, dang it.  Changing course,  I kept getting further away from my quest goal, which was always above me, with no way to go up.

Luckily Staypoofed and I are serene creatures who can take a moment to contemplate our ill luck:

I’ve been in this area numerous times via Instant Adventures, but of course you’re just on the run constantly trying to get your quest goals and you get no real sense of the layout of the area.   Try try again next time.

The two games I’ve been playing most are WOW and EQ2.  In EQ I have all but my Froglok Bruiser off the starter island.    I thought it was time to send my main character, my Fury, out adventuring.

Somehow tonight she got from level 11 to 18.

She spent the entire time in wolf form.  It isn’t one of those shape changing classes that has the use of different skills in another form.  The only difference I can see is when you hit the skill to start a ranged attack, she barks at the opponent. 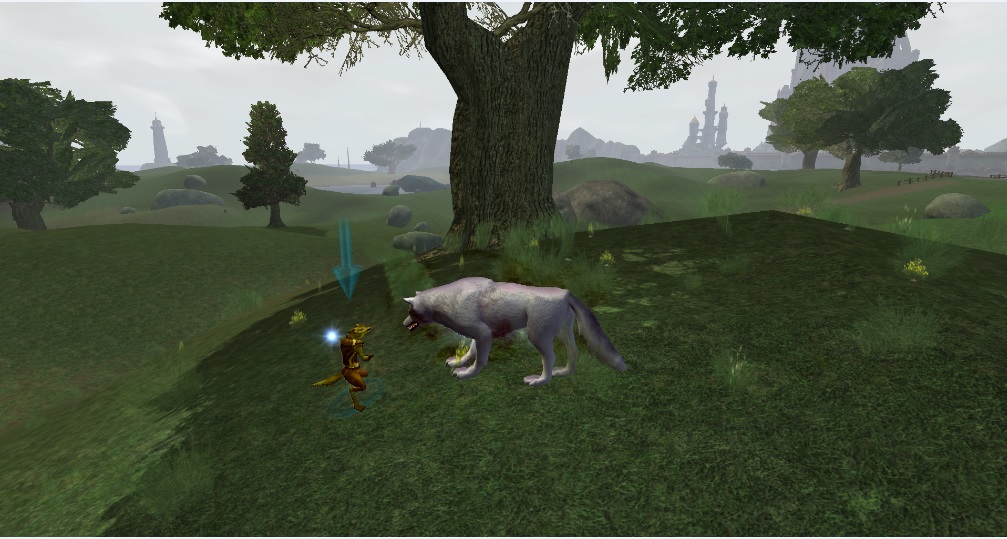 Oddities in games continue.  As it turns out I’m having connection problems once again, so that explains a few things that have happened.  As I came out of Qeynos though tonight, there was this big floating wall of text, and there wasn’t anyone fighting anything, and I wasn’t fighting anything but there it was:

It’s hard to describe the charm of Everquest 2.  I like the world, the quests, even the lovely drawings on the loading screens.  I was carefully picking up every quest I could see, and there are many.  I was thinking tonight if you are a quest lover, this is a great game to play.

I haven’t selected crafts yet for my characters.  I always want characters who can make potions, bags and furniture, three essentials for adventurers everywhere.   Sometimes certain crafts go well with certain classes, but I can’t tell if that’s the case here yet or not.  I’m reading guides before I commit to anything, but I’m filling my bags with materials just in case.

I’ve been out of town this weekend so no playtime till now.  Rift is Sunday’s game.
You’ll recall I had two staircases to try and I went for the down one, had two problematic npcs attack, though I found out tonight it is just the second guy on the lower steps who is a problem.

Figure A Guys on the Steps 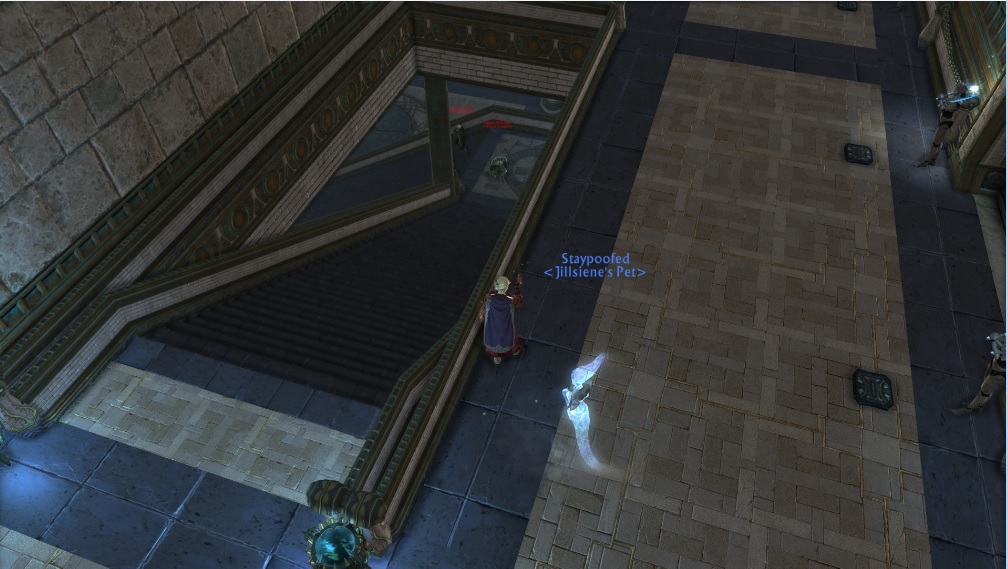 Hard for you to see, but they’re there.  I decided to take them head on (note going up the other stairs was a dead end platform), just fight the fight.

Second guy seems to have disappeared.

Down the stairs, there he is at the bottom.  Target him, NO Target.

Go all the way down to make sure the line of sight is fine, he’s inside the steps.

I run around the corner to check out the room and what other exit there may be.

He follows, but he’s in the wall.  Needer, needer, he says.

I do spot the next doorway but there’s another guy standing there and I’m almost dead.  Then Dead.

Soul Walk, come back right in front of Mr Frisky, run back up the stairs to the starting area.  He doesn’t follow.

Not in the mood right now, but next time in, I’ll have to lure him way upstairs as I somehow did last time and kill him off so I can advance.  Tricky.  This is all odd, I’ve never had trouble of any sort in Rift before.

Made level 10 Friday night so I can get my Punt-Yo-Self Mount.

I can’t stand the Frostfang Sea area, so I ran to New Halas, through the Spidey Cave, to the travel bell, and voila, Qeynos and my own snuggly apartment.  I’m going to enjoy playing much more now that there isn’t ice and snow and whipping chill winds everywhere.  How I do love sunshine.

I would like to join the Massively casual guild there, but the person’s mailbox is full, so waiting on that tender moment when my mail goes through.

I decided to send my Mage to an area appropriate to her level (50).  This turned out to be Storm Legion expansion territory, with a choice of going to the continents of Brevane or Dusken.  I know nothing about these, being way behind on the games actual content.  I had trouble finding recommendations from others, the best I saw being that Brevane is “life themed” and Dusken is “death themed”.

Landing in Cape Jule, there’s a big landing of sorts with all kinds of vendors, but only a single quest and zero players.  There’s only one way off the landing, down some stairs.  My quest is to disarm some traps.  Each deactivated trap releases a level 50 guardian to fight.

I’m thinking that since each fight is taking me to 1/2 health, I’m fine as long as I only have one mob to fight.  Then an automatic type quest pops to kill Daemon Loci, just because I killed one.   They’re easier than the the guardians were, all good.

I’m in a big room with multiple stairways up and down. 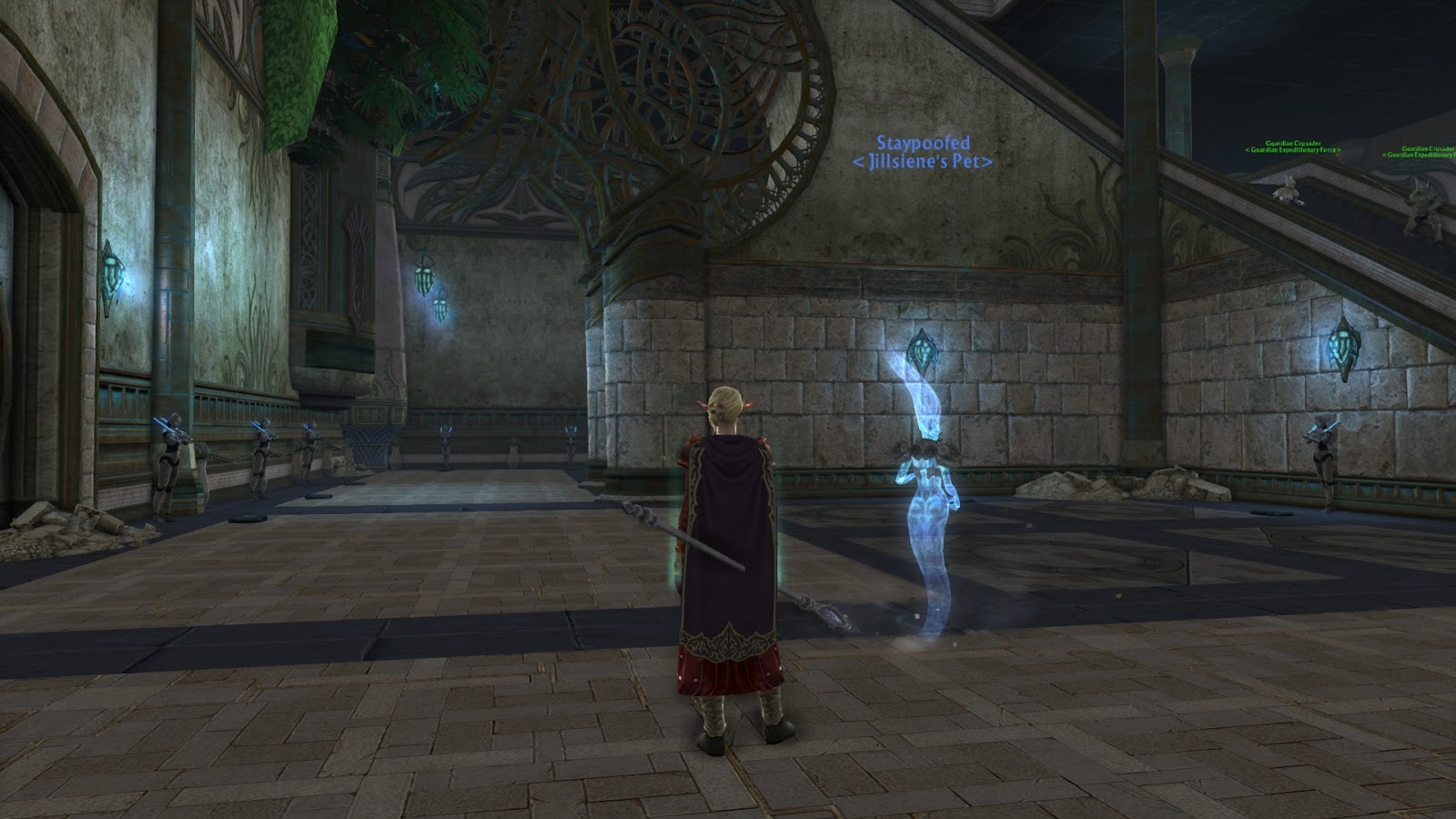 I decide to go down because I can see a Daemon on the steps there.  As you can see I have quite a few skills on my bar.  I was using mostly the bottom row, but injudiciously it turns out, I hit one on the second row that transported me a few yards away from the stair top to another spot in the room.  Whoa, whoa, somehow the guy I was fighting was joined by another guy I hadn’t even seen.   Though they’re both suddenly right in front of me, I have no line of sight to fight them, but they are able to whack on me.  Oops.

Ran back up the original stair way and only one followed.  Since he was miraculously in my line of sight now, I finished him off.

Still in combat with his unseen pal, I started back down the stairs and poof there he was.   My efforts weren’t so successful, and at a quarter health I ran back up the stairs, hoping a guard would take him out or I’d reach that magical spot where mobs are out of their natural range and they stop chasing you.

This sort of worked.   He stopped chasing me, but didn’t go away.  He lurked on a bridge over the steps.

My health went up, I went and killed him with ease.

A short but exciting introduction to a new area of the game.

Doh look at the tooltips for my skills so I don’t transport or do anything else potentially deadly to myself by mistake.