Via Eurogamer on Twitter, a gameplay video trying out Underworld Ascendant by Otherside Entertainment.

Spoken of here as a “spiritual successor” to the Ultima series–one I’ve heard of but have never played– it explores the apparently familiar environment of the Stygian Abyss.

I’m no fan of first person play, with creepy hands sticking out of your screen that you’re supposed to imagine are yours.   Still, the game environment, a rather large dungeon, looks fun to explore.

It looks like you have lots of options for choosing skills as you wish for your character.  You can have any combination of Fighter, Mage or Stealth skills.

It appears there are plenty of treasures to be found as you explore, so suit, up, eh?

There’s more information at Eurogamer   https://www.eurogamer.net/games/underworld-ascendant
including a November 2018 release date for PC.

I haven’t played a game in ages with such a long set of cut scene intros to the story.   It was interesting, but unexpected.

I’m still in the introductory area that shows here’s how you move, here’s how you fight.   The battles take place in what looks like an impenetrable castle.

Soon enough, bandits over run the gate and are somehow in the upper reaches of the castle as well.   My character, Geralt, seems to have (oh noooes) lost his memory of who he is, and how to fight.  The poor man had a devil of a time picking up a rusty sword right off the bat.

I chose Keyboard and Mouse because it’s what I’m used to.   Combat is pretty annoying.  It seems as if you’re mostly supposed to wait for the sword icon that indicates you’re fighting a person to turn into a flaming sword.   It does so at intervals.  Then you click.  I’m used to jamming on my keys, though so the message “too fast” was pretty constant.

As part of your combat, you chose to fight a certain way with agile or heavy hitting combatants.  It doesn’t seem to me they’re waiting for any flaming sword thing, they just whack whack.

I could not see their health bars, or if they’re there, didn’t recognize them, so had no idea if they were going to go down any time soon or not.

Which led me to the longest fight in video game history.  (Mine, anyway).

This wizard guy starts out in his bubble.

You can’t touch him with your flaming sword, but you can push him over and stun him briefly with a magic ability called Aard.    After getting nowhere, I kill off his dozey henchmen, who aren’t fighting, they’re kind of dangling in air.

So, forever and ever I whack at him, and push him down, and he just pops up and teleports to another spot in the circle.

I looked up the fight and lo, I’m supposed to use the Heavy Hitter technique on him.  I was thinking he was agile because he was all over the place. Down, at last.

The bad guys get what they came for and teleport handily away.

I level up, though, and can pick a tiny bit of talents.

I like the Witcher crew, and I’m sure we’ll be going after the bad guys.   I really need to work on having patience with the combat though.

I found and have been having a lively time at The Friendly Arms Inn.  I had difficulty at first finding the Inn entrance because it was in the dark of night and I didn’t see the stairs leading up.

Once I did, a Mage Assassin insisted I must die.  I was barely able to mount a defense when my character started running in circles, then was dead.
On my second try, (doink) I forgot to equip my bow and went running up to him sword in hand.  It ended badly.
Try three, bow equipped, I sent Imoen in to talk to him.  It is so odd he decided she was the one he needed to kill, though she clearly was not the glorious Atheren.  Imoen died, but I did not, so full save. 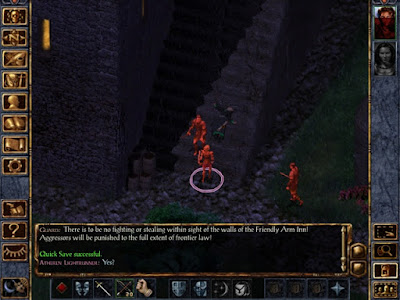 As I was looking to find out how to boot her dead corpse from my party, I saw she could be revived at the handy temple nearby for a hefty 100 gold.  I had 299 so, I thought why not. 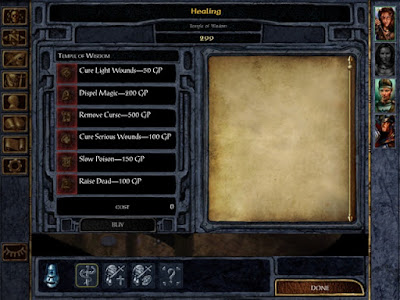 Before leaving town, I really need to make sure I am more familiar with party management.  Is there an ideal number of members and class makeup?  I need to make sure I can pause and get everyone in position, spells and weapons ready.  Should I be using my party members like little pack mules to carry things we find?  If they die, do they have enough loot on them to make it worth resurrecting them? 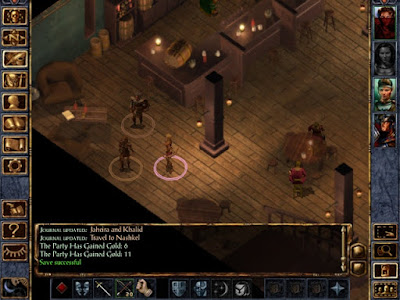 Should I go directly to the next town or backtrack through the area to the south to make sure I get any loot or Xp there before moving on?
Excellent game, lots to think about.  Never fear I save constantly.  Just in case.

I have the edition of Fallout 3 with the Lunchbox, the Bobblehead, the PipBoy.  You know how these things go. It has been in the back of my mind for awhile, and next thing you know, I’ve installed it and I’m in the Vault.

On my first session, I was tired and didn’t pay enough attention to what I was doing get out of Vault 101 smoothly.  I pretty much punched my way out of the place, and though I survived all the fights, I was loaded with pistols and ammo but using my fists and then a Police Baton.  I don’t know why I’m prone to melee fighting in these games. I suspect it goes back to The Wrench in Half-Life.  Also, I notice if you run up on things and just whale on them, they can’t seem to fight back very effectively. And I win.

If I was going to play smarter, I’d need to start again and take the time to be more strategic.  I read some tips and guides and had a set of beginner stats that should be good, and yet I veered from them because I couldn’t bear to drop my Strength or Endurance much.

I had more points in Charisma the first time around, which helped me with a certain bully character. This time he was all sneers, the banana.

Lockpicking has never been a skill I’ve done well with, my torque is always a bit too much.  In the Wasteland, you need the skill though.  I’m just going to have to save before trying and master it.

The game world is such a rough world, and all of the characters are gritty.  Nobody looks to have had a bath in years, let alone a drink of water.  There are a variety of random creatures and mobs who pop out of nowhere.

On release, I did not like the VATS system of combat, but I’m going to work with it this time and try to master that as well.  I think my wrench and I are just a bit twitchy.  Though I’m specializing in Pistols this time.

My first assignment is to go to a place called SuperDuper Mart.  I recall it with a bit of dread from the long ago play through.  Nothing good in aisles 4-8…filled with nasties.  I must have survived it somehow.