We had a once in a lifetime (because you can’t get tickets, people) trip to San Diego Comic Con.  Despite the hours of waiting in lines I’d go again if we could get Friday/Saturday tickets.  The atmosphere there is like nothing at any convention I’ve ever been at.  I swear every single person there was dying of excitement just to be there.

One of the panels was on Epic Mickey and featured Warren Spector.  I’ve long admired him and had the utter boldness (for me) to work my way into the front row after sitting through several other panels.

He was great, he was brilliant, it was The Happiest Panel On Earth.

While I have zero boldness, my husband specializes in bold.  He went up after the panel and talked to Warren Spector and came back with his autographed name tag! Ahhhh!!!!!!  Talk about treasures. 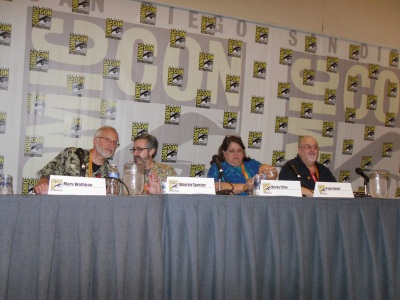