If they let me just choose, I always chose Lawful Good.  Because I want to be the best good I can be 🙂

A lawful good character typically acts with compassion and always with honor and a sense of duty. Such characters include righteous knights, paladins, and most dwarves. Lawful good creatures include the noble golden dragons

Sometimes, they give you questions to answer to determine your alignment.  Then, to my consternation, I am sometimes Chaotic Good.

A chaotic good character does what is necessary to bring about change for the better, disdains bureaucratic organizations that get in the way of social improvement, and places a high value on personal freedom, not only for oneself, but for others as well. Chaotic good characters usually intend to do the right thing, but their methods are generally disorganized and often out of sync with the rest of society.

Time to see how you fare: 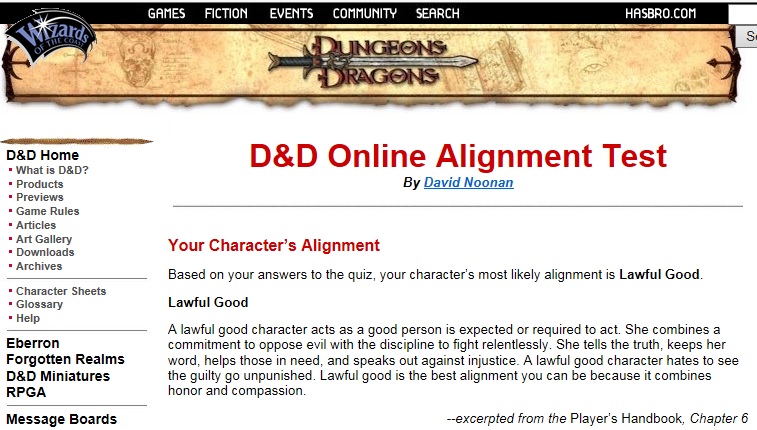 They had some gnarlier questions, with some rather impossible to pick a good choice scenarios.  My husband got to the second question and refused to go further because none of the choices were what he would do.

I came out Neutral Good.   You are guided by your conscience, rather than any formal laws or traditions.  You may occasionally break the rules, but it’s generally in the service of the greater good.