My new Demon Hunter made it through the beginning experience pretty quickly tonight.  The area was crammed.  I played one in beta through level 110, but didn’t feel too interested in the reputation slog after reaching the max.

The many movement options for this class make it so much fun to play.  They mow through everything in their path, and when you put a bunch of them together, nothing stands for long.

Despite the fact that “everyone hates Draenor and garrisons”, blah blah blah, there were a ton of Demon Hunters in Tanaan heading for Draenor and their own snuggly spot in the world, something they won’t have in any way in the Broken Isles.

My Demon Hunter has the same cold mask as my other elves, but her flaming yellow/green eyes sort of warm things up.  I think.

I’m not dead all of the time, but it certainly does happen far more than I would normally experience.  I’m not certain if I’m not playing the Havoc Demon efficiently or if the world is a bit harder to navigate.  Both are factors, I’m sure.

I noticed on the Beta Boards someone else saying that the Demon Hunter seemed almost all powerful in the starter area, but as soon as they were out in the larger world, they were having a significantly different experience.   As I quest and get better gear, my survivability is improving.  I still need to tweak my rotation and play.

I’m liking the class.  With all of the movement options as part of the play style, the character is incredibly mobile.   I still haven’t mastered the Art of The Glide, which is causing me problems every time I have to return to the Class Order Hall on the Fel Hammer.  You need to leap and glide from the edge of Dalaran’s floating city over to a platform, then transport to the Fel Hammer.  Luckily a bat creature catches me and drops me on the platform each time.

I’m planning on playing this character through to 110 and beyond.  Having a brand new class to play in an all new area makes the game extra new and exciting for me.   Normally, I’d want to try the classes I’m familiar with as well, but I think my time is better spent leveling and gearing my Live characters as close to iLevel 680 as I can get them before the expansion comes out.

The city looks as it always does, except that the Underbelly is an Instant Death situation for non-PVP players like myself.  After exploring briefly (I thought a quest called The Royal Summons must be down there), I could barely get my character out of the Underbelly alive, with multiple deaths and tries for the exit.  Ouch.  Beware the Underbelly.

I have not found a single repair npc anywhere out in the world so at this time you always have to return to Dalaran to repair and sell junk.

This is one of my favorite things.  You are able at any time to go to any area of the Broken Isles to quest.  You’re never under the level of the mobs because it all adjusts to your current level. 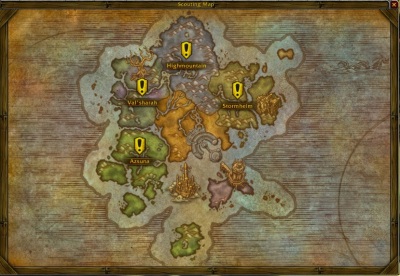 One thing this does is, it spreads the population out over the entire Broken Isles.  You’ll never be the only one dragging your lowbie character or alt through an area everyone else has already done.   There will always be other people there questing or leveling or looking for resources.  Even at the top, when people are at 110, those Daily World Quests will have players all over the map.  It just seems like a great way to make the world more viable, and populated, and fun.

My Demon Hunter appears to have no self heals at all which is a bad situation.  I think each class should have some sort of heal, in addition to having consumable options for staying alive.

Very exciting to me is, while you’re out questing, there are npcs with Alchemy and Herbalism quests, with materials for completion being available right in the area you’re in.  I love that as a way to integrate the professions into the game world once more.

One of these quests gave me a recipe that heals for 500,000 instead of the usual 68k.  I’m sure the ingredients won’t be easy to find, but it increases that treasure hunt feeling you get when you’re looking for resources as well as killing your way through the world.

Unrelated to Alchemy, but I have gotten two Cloth drops from mobs so far, and I love that much better than just cranking out some cloth as a Daily task.  Adventure! Discovery! Treasures galore!  I’m in!