I did a few quests last night to get a few in on the first day.

Home Alone only required that I use my hearthstone with my orphan out.  Easy.

The orphan who has a name given by the Orphan Home matron just had Human Orphan over his head.  I quickly became attached to the sprite anyway.  He had a series of quests which I did.  I liked best taking him to Sentinel Hill and riding a two seat motorcycle with him touring the giant breach caused by Cataclysm.  Spunky lil’ guy had a great time.  I also bought him ice cream and a kite.  What a pal. 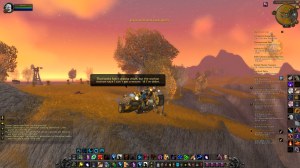 This morning I think I’ll squeeze in Warsong Gulch.  Hahahahahaha.  I decided today I’ll just follow the rest of my team and kill whoever they’re killing.  Went pretty well for a bit actually, then it came time to defend the flag we’d nabbed and I was feared, stunned, you name it.  And…you know it goes when the fighting is intense.  All my skills kept coming off my toolbar.  Must lock them for the next try….

I think, looking at the scoreboard, that I didn’t do so badly for a first shot.

I was really good about pulling my orphan out after every death just in case we won.

Research strategies for a noob Druid in a battleground.

Use my health potions!

Look through the bank for pvp resilience potions I know I have in there. 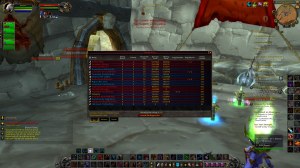 I’ve liked Druid best for some time now and in my Blackwater Raiders set of characters I’ve played Feral Cat.  I’ve decided to push that character forward so I can try the scenarios which are not avalable till level 85.  It will take a fair bit since I’m just short of level 64.  My Earthen Ring 73 Druid may be a better bet except that I stopped playing those characters when I realized I really didn’t know how to play any class well and I decided to create a new set from the ground up and learn from scratch.  As I have caught up in levels with my Earthen Ring counterparts I have fixed what I could on them stats and armor wise then sent them into the dungeons to try out their skills.  My Earthen Ring character has armor that emphasizes the wrong stats and I have to move my leatherworker forward there in order to outfit her properly.  Sigh.

In any case, this is the order of my Feral Cat toolbar:

Beserk (Use when available)

Savage Roar (Use when available)

I played through several dungeons last night successfully so I think the rotation is good.

At one point the tank poofed right away as tanks do, and they asked me to be a bear till a new one was found.  Well, you can change but you have like four moves and none are really useful to keep you going as a tank.  I thought my days of having people ask me to switch to bear were done but agh.  After that dungeon I decided to switch to Guardian as a secondary talent so I could at least do it if needed.  I could not choose it for love or money.  Once Feral Cat was chosen as a primary it would only let me choose Restoration as a secondary.  I tried to read up on this to see if I was doing something wrong but could see no mention anywhere.  I don’t know if my cat is bugged or what.  I paid several times to completely reset specializations to be sure but nooo.    What is the use of having four specializations if you can’t choose between all of them?

After consulting the usual sources I chose these Talents:

Have not selected Glyphs yet.  I know I am keeping Rebirth however because it is so useful in a group to bring someone back while in combat.

I despise the new travel form.  It seems slow and ungainly and hops like a huge bunny.